The male psyche is a fragile thing.

It's the most basic plot recipe in theater: take a family; add a visitor, usually unexpected, who's been away for some time; stir vigorously; then watch as secrets from the past bubble to the surface and the family's settled existence boils over.

Originality comes from the details. The "family" in Anthony Nielson's Penetrator is a pair of twenty-something housemates: Max (Michael Mason), a lanky slacker and cokehead addicted to video games, and Alan (Jared Culverhouse), an overweight working stiff with a stunted social life. Though real friends, the two seem unable or unwilling to fully mature, and their friendship manifests in adolescent gross-out humor and shared pop culture references. (You can find similar characters in Judd Apatow's current film Knocked Up.)

The Working Man's Clothes theater company – the vibrant outfit responsible for the recent fuckplays – has effectively revised this powerful 1993 British one-act for a present-day American setting. Max's childhood pal Woody turns up at Max and Alan's cramped New York City apartment. A solider returned, under mysterious circumstances, from the Iraq War, Woody is as mentally fucked up as the paranoid fantasies he describes – to an extreme that makes him almost seem like a ghost or a figment of some kind, pushing the play from the roommates' antic realism into the realm of the bizarre (and scary). 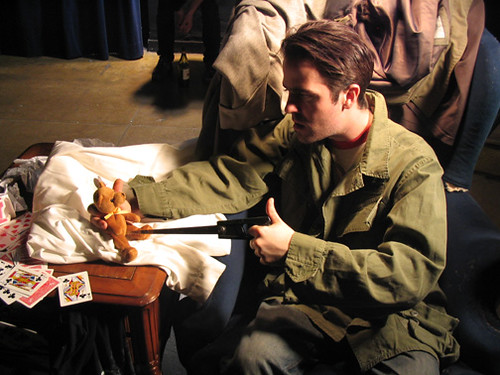 In fact the play becomes a not entirely realistic psychological thriller. It's also not for the faint of heart. Fortunately the actors are so skilled that they can pull us with them through the transition, and bring to life the tension of Nielson's script. Mason and Culverhouse make their characters so real they mesmerize. Wimpee makes Woody genuinely terrifying. In effect, the play takes props and action common to horror films and hurls them right into what feels like our living room.

As a result one leaves the theater feeling almost viscerally disturbed, but more from the action on stage than from any deeper message. We don't need the theater to tell us that the human psyche – especially the male version – is a fragile thing, nor do we need to hold yet another mirror up to nature to know that war is both an internal and an external hell. But theater, typically, isn't about lessons. We go because we want to be touched at a gut level, affected more presently than we can be by any other art. Penetrator more than does the trick.

Through June 23 at the American Place Theater in New York. Tickets at Smarttix or call 212-868-4444. For mature audiences.