Dottie has trained Betty to be the perfect 1950s housewife. But what's really going on here?

Theater Review (NYC): You May Go Now by Bekah Brunstetter

Bekah Brunstetter's play To Nineveh was honored with a New York Innovative Theater award last year, and she is one of the many talented brains responsible for the recent f*ckplays extravaganza. Her new full-length drama, You May Go Now, is getting a bang-up staging this month at the 45th Street Theatre.

A work of psychological suspense fed by humor and fantasy, darkly and fluidly directed by Geordie Broadwater, the new play fascinates but sometimes confuses. Dottie is raising her teenage daughter Betty to be an avatar of the perfect 1950s housewife. Yet right away something's clearly cockeyed: the time, apparently, is actually the Great Depression. And there's a peculiar lesbian/child abuse thing going on (which never quite gels). Then, suddenly, Dottie is kicking Betty out of the house on her eighteenth birthday. All Betty has are a couple of suitcases, an accumulation of Stepford-worthy housewife training ("Speak in a low, soothing voice. Don't ask him questions about his actions, or question his judgment or integrity"), and a final brittle word of advice:

"You will get off the bus and go to some sort of dining establishment and make eyes. Someone will find you."

It's like a horror movie: violent shoving, a snowstorm, desperate, monstrous banging on the door, and finally, silence – peace and quiet for Dottie, who has transformed before our eyes from tyrannically passive-aggressive mom to psychotic monster à la Stephen King's Annie Wilkes.

In a beautifully crafted transition, suddenly it's the present day – or is it the '70s? (Again, the time cues confuse.) In any case, the agile Ginger Eckert, who plays Dottie, is suddenly a modern woman who sits around the house trying to write a novel and can't find her way around the kitchen. So, she's now playing the grown-up Betty, a generation later – right? Or not. And why does her depressed husband Robert (Ben Vershbow) keep making funny, absurd entrances? And why does Betty come back the very next day, and why isn't Dottie upset about it? 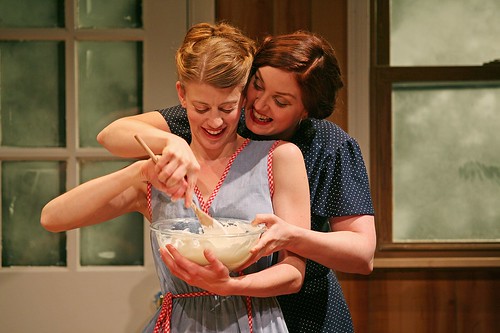 Melinda Helfrich and Ginger Eckert. Photo by Rachel Roberts.
Act II resolves some, though not all, of the mysteries. The play's fault is that while it tells a deliciously meaty story, the bones of the plot could use some propping up or some further organization. In spite of that, it is effectively suspenseful. The sound design subtly sets the moods, and the lighting is brilliantly designed, especially during a late scene where Betty stays up all night reading a revelatory PowerPoint presentation on a ghostly-glowing Mac laptop, brought by Philip, a mysterious stranger Betty meets at the bus stop (Justin Blanchard, in a whisperingly intense performance). The changing colors on the screen light Betty's face, and finally the sunrise shows redly through the kitchen window, lighting up long-hidden truths.

The production has many positives, but Melinda Helfrich's funny, touching, and superbly focused portrayal of Betty is its single greatest asset. The rest of the cast does have fine moments, and Eckert has much more: her adroit handling of what is, in all but actual fact, a dual role, is worthy of note. When Robert, devastated by bad medical news, proposes adopting a child, Dottie's passive-aggressive refusal – mostly silent – is a marvel to behold. But Helfrich lights up the stage every moment she's on it. Flitting about, hiding in the shadows like a small child, lighting up at Philip's appearance, defending her mother from a perceived threat (who is Philip, anyway?), she's a small revelation.