The sheer energy that pours from the stage during the numerous ensemble numbers is a pleasure to take in.

Musicals scored by singer-songwriters are hot these days, at least in theory, but the success of Duncan Sheik's Spring Awakening hasn't guaranteed anything for similar efforts. Patty Griffin's 10 Million Miles, for example, didn’t get great reviews and ran off-Broadway for only a month. As with Mamma Mia and the many pop-nostalgia musicals that followed it, one brilliantly successful case does not guarantee a payday for others of the same ilk.

A musical has to work as a piece of theater, of course; good music isn't enough (that's why they invented concerts). Audiences, and to a lesser extent critics, have to like the whole show, not just one aspect. Spring Awakening is a great show because it's a good story staged wonderfully well and told with exciting music that fits. Sheik uses the vocabulary of pop music, but the show is a modern-style musical, with songs that exist entirely to serve the story. Hummability isn't even a secondary goal.

It's hard to make theater out of today's pop, because most current songwriting is confessional rather than character-based. Songwriters like Bob Dylan, Bruce Springsteen, and, to a degree, Patty Griffin, write songs from the points of view of different characters with interesting narratives. But such songwriters are rare.

Kevin So is a singer-songwriter who, like the above mentioned artists, doesn't just express feelings but also tells tales and sketches characters. Until now that had been captured most explicitly in his 2003 two-CD concept album, Leaving the Lights On, which tells the R&B-inflected story of a Chinese-American boy who doesn't want to go to college and become an engineer or a doctor, but instead dreams of becoming a rock star. So's unusual ability to frame vivid characters and settings in catchy, sophisticated pop tunes makes his songs ideal for the stage, and a fine musical has now been crafted from them.

(Full disclosure: I was previously familiar with many of the songs in the show, having, in the past, played in Kevin So's band.)

Victor Woo: The Average Asian American is receiving an ambitious, joyful, and even somewhat star-studded maiden voyage by the Present Company as part of the New York International Fringe Festival. It successfully combines the narrative flow of a show like Spring Awakening (or an Andrew Lloyd Webber musical) with an original-music version of something like the pop-hummable Jersey Boys. The show is a little rough around the edges, but that's to be expected of any full-scale musical done on a Fringe timetable. With a little more polish it could be a smash, and not just with the downtown hipsters who populate the Fringe audience.

To begin with, the production boasts some heavy-hitting performances. Francis Jue is a veteran of Broadway productions such as M. Butterfly and Thoroughly Modern Millie. He turns Stanley Woo, the father, into infinitely more than the long-suffering immigrant stereotype that his twelve-hour days, Chinese restaurant, and dream of sending his son to Harvard might suggest. Looking vulnerable with his slim figure and plain, clean white dress shirt, he conveys all the complex feelings of a father with old-world values trying to make a good life for his family in a new world of struggle. He threads aching colors through the intense "The Hand That Feeds," the haunting "Stanley Woo," and the rocking "Streets of Chinatown" among other numbers, and is just as powerful and touching in his spoken scenes.

Christine Toy Johnson, another Broadway veteran, has less to do in the role of the mother, but her lovely voice and graceful presence make touching moments of "Call it a Day" and "If It Were Up To Me." Robert Pendilla lends a sweet tenor and a big-hearted suavity to the role of Henry, the hard, street-savvy youth who buckles under the ever-optimistic Victor's onslaught of friendliness. Michelle Rios, Michelle Liu Coughlin, Nedra McClyde and others have effective scenes in smaller roles, and the sheer energy that pours from the stage during the numerous ensemble numbers is a pleasure to take in.

At the center of it all is Victor, played with a sly fusion of mugging and gravity by Raymond J. Lee (who has appeared on Broadway in Mamma Mia). Lee's precise singing voice has only modest power, but his expressive face and elastic energy more than make up for it. In his hands Victor becomes both down-to-earth and larger than life, whether he's playing twelve (at the start) or mid-twenties (by the end). 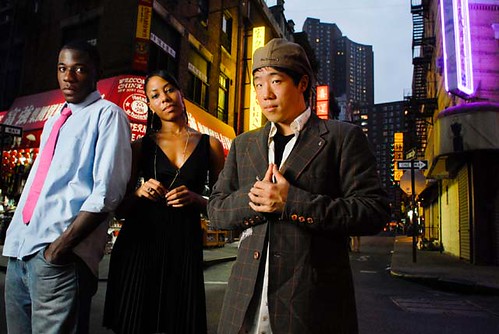 McKinley Belcher III, Nedra McClyde, and Raymond J. Lee in Victor Woo: The Average Asian American. Photo by John Mazlish.
In short, a strong cast, a good live band, and an unusually excellent book (by the director, Kevin Merritt) give blooming life to So's crafty and inspired songs. The choreography, by JD Aubrey Smith and Akim Funk Buddha, tickles the eye, and sometimes dazzles, as in "New Sensation," where a group of robotic record executives debate Victor's star potential.

It doesn't matter whether Victor achieves his dreams in the end. The journey is the key, as he eventually explains to his mother. One of the show's strengths is the way it tells the father's story and the son's in parallel, with equal sympathy and sensitivity. This examination of two generations makes the show much deeper and richer than it would have been if was just about a kid dreaming of stardom. There's a lot of autobiography in these songs and this show, but, far from being a confessional, it's a wise, personal, informed exploration of family, of love's power and its limits, and of growing up.

Kevin So can be a wordy songsmith. While that's appropriate for Victor's hip-hop milieu, it requires extremely precise timing from the performers and close listening by the audience. Some of the tempos seemed a little faster than necessary – there were places where the lyrics got lost in the rush, generally through no fault of the performers. The show has a lot of numbers, but they're punchy ones, and the story moves rapidly; the play is not in danger of being too long. Slowing parts of it up a bit would help make it more universally accessible (especially considering the non-inner-city tourists on whom Broadway depends).