In a new work, a playwright honors his grandfather and all the other Americans who illegally went to Spain to fight against Franco.

It's 1937. Three idealistic New York City workers (and card-carrying Communists) have traveled to the French-Spanish border. They're about to cross into Spain to join up with the government in its doomed struggle against Franco's fascist revolution.

Michael Niederman has written this new play rather like an old-fashioned melodrama. Emotionally charged, suspenseful, and tackling big issues, its style and structure are well suited to the subject. Indeed, Niederman sets the tone with a lengthy story by the excitable Albert (Gregory Lay) about an inspiring performance he attended of a play by Clifford Odets. Yet at first we think we're hearing about a union meeting; only as Albert's description unfolds do we realize he's been under the spell of the theater. This effect has a magic of its own.

In a rustic inn (beautifully designed by Blair Mielnik) the three friends get drunk and disorderly as they shore up their courage to enter Spain the following day. As they alternate between reinforcing each others' resolve and arguing passionately, their differing revolutionary shadings become clear. 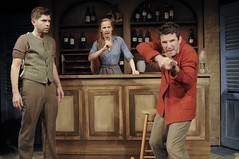 Albert has the most fiery personality, but he prefers revolution from within the system. The steadier but more radical Leonard (the charismatic Alex Emanuel, who calls to mind a young Ronald Reagan) believes violent overthrow is needed. Meek Carl (Marty Keiser) has a more conflicted soul.

The arrival of a mysterious American stranger – another useful theatrical cliche – further exposes their rifts. Is he a fellow-traveler, or some kind of spy?

Act I frolics along like a roller coaster. Despite the serious subject matter, it's very funny. Lay is especially brilliant as Albert – brash, loud, so excitable he literally collapses. His volatility gives a few scares to the Waitress, a relatively small but key role played by Anna Gutto, who was good in the recent Sa Ka La and shows enormous depth here, speaking only in French while trying to communicate with three scruffy and unpredictable Americans who don't speak a word of it.

Act II shows us the edgy Albert and the vulnerable Carl on their own. Here the role of Carl expands into the play's second really meaty one. He's a Hungarian immigrant struggling mightily between his socialist ideals and his simple desire for a family and a decent life in his adopted United States. The stranger, Marion Welch (an effective Eric Rice) with his influence on Carl becomes the engine of the plot. 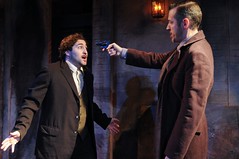 As the new day dawns, will Carl join his friends as they head off, very likely to their deaths on a battlefield in a strange land?

The long scene between Marion and Carl is the one section that didn't quite work for me. The intensity and cunning with which Marion pushes and plays Carl feels like it's contrived for dramatic effect. Nevertheless, like the rest of the play, the scene is acted very well; Keiser is especially impressive and touching, and we do eventually learn what Marion is up to (and it rings true).

According to the program notes, Niederman aimed with this play to honor his own grandfather and the thousands of other Americans who illegally went to Spain to fight against Franco. They viewed their struggle, and we can view that point in history, as a crucial moment at which Fascism might, conceivably, have been stopped before the nightmares to follow became inevitable. With this old-fashioned, powerful play, it's safe to say that the playwright has achieved his goal.