Art and imagination can keep war at bay, at least for a little while, but they also keep it alive.

With apologies to John Lennon, war is never over, not even if you want it. Case in point: Samuel Finkelbaum, a Holocaust survivor holed up in a one-room flat in occupied Berlin five years after the end of World War II. An imaginative showman and puppeteer with a tendency towards megalomania, Finkel refuses to believe the war is over, and won't come out of his room. He's paranoid, delusional, and patently insane, but as imagined by the French playwright Gilles Ségal and animated by the actor Robert Zukerman, he merits our full sympathy and attention for an hour and 45 minutes, intermission-free.

The plot of The Puppetmaster of Lodz could be summed up in two or three sentences, but I'm not going to do it, for two reasons. First: it would be a meaningless exercise unless I gave away the ending. Second: it's not a very good plot. It doesn't really make sense. And it's not why the play is worth seeing.

Finkel is on stage all the time. Much of the action is just between him and his assortment of puppets. The puppets stand in for people from his past: wife, father, doctor, Rabbi, and a whole clothesline of concentration camp inmates. Finkel operates the puppets mostly by moving them directly, though he refers to them as marionettes, and like all good puppeteers, he imbues his dolls with vivid personalities and pathos. 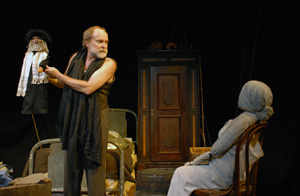 And like many who came out of the concentration camps alive, he's burdened by survivor's guilt, the ins and outs of which he explores through word and action with his puppet characters. The playwright asks whether, in the face of our seemingly endless parade of mini-massacres and mini-genocides echoing the Holocaust through the ages, we are "anesthetized[d] so that we are prevented from reacting, prevented from being moved to rebel?"

Ségal answers (in his program notes) that "facing the encroaching rise of barbarities, we have an obligation to continue to live, to continue to sing, to be happy, to laugh, to laugh, to laugh!" He lives this motto through the complex, disturbing, larger-than-life yet shiveringly weak character of the puppetmaster. And we do, at times, laugh with Finkel, and at the antics of the outside world trying to get him to come out. But the exhortation to live and celebrate is not a simple matter. Finkel asks the big, troubling questions: how can a Jew continue to believe in God after the Holocaust? How can you trust your fellow man? How can you go on living when your loved ones have been brutally destroyed?

War is never over. Even a particular war, one that ended half a century ago, isn't over. It isn't over for Finkelbaum in 1950, though Germany has long since surrendered and Berlin is occupied by the Allies. 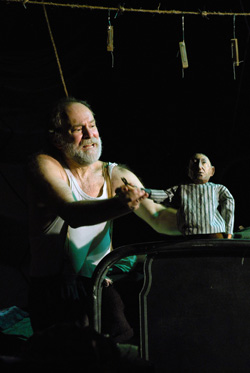 Zukerman's grand, captivating performance is buoyed by an excellent supporting cast. Suzanne Toren is convincingly caring as the humane, frustrated concierge. Herbert Rubens is grave and avuncular as an old friend who comes looking for the reclusive puppetmaster. Daniel Damiano amuses in multiple smaller roles. Sharing the spotlight with Zukerman are a wonderful set (by Roman Tatarowicz), agile direction by Bruce Levitt, a superb translation by Sara O'Connor, and the puppets, designed by Ralph Lee.

Will Finkel ever get to put on his great puppet masterpiece for an audience of free people? We don't know, and now we're back out on the street – the play is over. But the war is never over. Art and imagination – whether Ségal's invention, or the puppetmaster's tragic, funny, macabre doll stories, or our reactions to both – can keep the war at bay, for a little while anyway. But they also keep old wars alive, on the stages of our theaters and in the rages of our memories. Perhaps we need them to do this.

Film Interview: Stephen Warbeck on ‘The Man in the Hat’