Two sisters' helplessness in the face of their mother's precipitous decline rides a wave between heartrending and frustrating.

Oslo Elsewhere is a theater company specializing in bringing Norwegian plays to US stages (and vice versa) in new translations. Its current production of Jon Fosse's Sa Ka La is the first time the work has been seen in the US. The company bills the play as "about syllables and expectations, preserving time and wasting it."

That statement is true enough as far as it goes – the title does come from the nonsense syllables uttered by the central figure, Mom (Kathryn Kates), who's been hospitalized by a massive stroke on her 60th birthday. But the deep subject of the story is distance. Fosse, through director Sarah Cameron Sunde's witty translation, effectively explores the distances between even the closest family members. Sunde makes those gulfs manifest by physically separating actors during key exchanges, while cleverly staging alternating scenes, which occur in two settings, in and around each other.

Using the occasion of an illness or death to gather a family and thus set a play's action in motion is one of the oldest and commonest tricks in the dramatist's book. But that's because it has a tendency to work. And Fosse has a very distinct delivery. His language is minimalist and repetitive, Beckettian and (to use a musical analogy) Reichian. The pacing (at least in this production) is slow, sometimes agonizingly so. It's probably safe to say that if you like Ingmar Bergman movies, you'll appreciate this play, but if you don't, there's a good chance you won't. 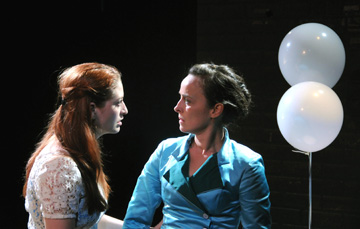 Slow pace isn't the only thing distinctly Scandinavian about the play. Leaving aside the Ibsen references, a certain Nordic stiffness and reserve is manifest, particularly in the character of the older daughter, Hilde (Birgit Huppuch), whose embrace of her more emotional sister Nora (Marielle Heller) in Mom's hospital room positively bleeds excruciating hesitancy and discomfort. That reserve is also found in the short lines of dialogue that dominate the script, clanging with Anglo-Saxon hardness. And it extends even to the funny scenes between the sons-in-law, who, uninformed of Mom's stroke, wait uncomfortably, like Vladmir and Estragon, for their mother-in-law to arrive, with their wives, for her own party.

Henning: Yah that's how we met / yah / we married sisters / you the youngest / and I the oldest

Frank Harts and Raymond McAnally, the two fine actors who play Henning and Johannes respectively, generate a lot of laughs with their arch delivery of passages like this. Their early repartee provides a humorous counterfoil to the sometimes overly drawn-out scenes in the hospital, where the daughters' helplessness in the face of their mother's precipitous decline rides a wave between heartrending and frustrating.

As Mom sleeps, wakes, and utters her nonsense syllables, wordless yet fraught with human feeling, we're moved equally by Hilde's icy repression and Nora's flowery anguish. Yet Mom's personality somehow comes across just as powerfully as those of her putatively more articulate daughters.  That's a testament to Kates's remarkable performance in a role that includes a lot of sleeping, never lets her get out of bed, and permits her no actual words – only syllables and stroke-mangled facial expressions. She's painful to watch, and utterly convincing. 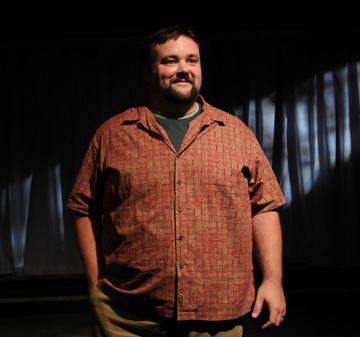 We're left with some open questions. Trine, an old family friend, arrives for the party with her new husband. Why, though she is the sisters' age, did she end up in a lasting friendship with Mom? The fact is raised as if it might be a key to understanding the family dynamic, yet it's never addressed.

The frequent use of the syllable "Yah" (halfway between Norwegian "Ja" and American "Yeah") effectively ties all the characters together and replaces the usual "Um"'s and "Well"'s and "Y'know"'s of American idiom. But we can't help pausing to wonder whether it's carried over from the original Norwegian, and if so, what did it mean there?

When a third sibling, Ola, eventually arrives – even more painfully detached from his feelings than Hilde – is his old-fashioned three-piece suit meant to indicate a setting some time in the pre-cell phone past? And does that explain why the characters aren't phoning one another at the first sign of lateness or uncertainty, the way 21st century folks normally do?

Sunde leaves the characters from one scene on stage while the next takes place, with the actors brushing past each other and even occasionally touching, across time and awareness, producing a spooky tingle. In the hospital scenes, the actors string out their lines across what seems every fiber of their beings.  They do the same with their pregnant pauses. Meanwhile, back at the house, the in-laws and friends verbally dance around their mutual discomfort. Through it all, repetition, sometimes excessive, infantilizes the stricken family, especially the daughters.  This process rings harshly true, and is thrown into even higher relief by the light of their mother's tragic reduction to a creature of nonsense syllables.

Finally, the production values are high, matching the skill of the excellent cast.

Problematic but thought-provoking, and intermittently fascinating, funny, and insufferable, Sa Ka La is – or maybe isn't – a good introduction to the work of a major Scandinavian artist. Fosse doesn't like to explain his plays. Explaining isn't the point.

'Hello Kitty and Friends Lotería' from The Op Games is truly international as it brings together game-play from Latin America and one of Japan’s greatest cultural contributions into a single entertaining game for all ages.