Two war hostages are wrenched into a space so unreal that erupting into song seems as sensible as anything else.

Recent years have witnessed some of the most nightmarish events you'll ever see on the TV news. The fates of some of the Western hostages taken by "insurgents" during the early years of the Iraq war would seem unlikely candidates for the musical stage.

Hostage Song defies those odds. Clay McLeod Chapman's taut script follows the travails of two hostages, Jennifer (Hanna Cheek) and Jim (Paul Thureen): cut off from their jobs and families, bound and blindfolded, they struggle towards a peculiar transcendence rooted in their utter degradation. It sounds crazy, but in the event it's touching, funny, gripping, and ultimately, yes, transcendent theater.

Kyle Jarrow's darkly powerful pop-rock songs do not always further the story as in a traditional musical. They illuminate the characters' states of mind and emotional history, but sometimes stand apart from the action. Given the Beckettian out-of-time feel of the hostages' closed world, this isn't, however, the flaw it would be in a different kind of story. And in other places, the songs do carry character development and some action; it is partially through song, for example, that Jennifer and Jim's developing feelings for each other, transference-based as they are, are shown to be nevertheless honest and true. Their extreme situation wrenches them into a space so unreal that erupting into song seems as sensible as anything else. 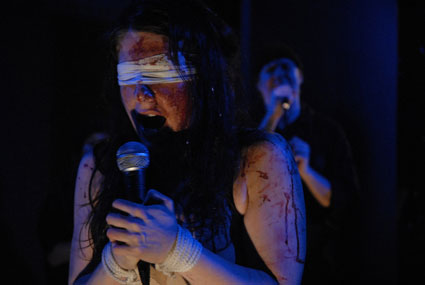 Hanna Cheek and Abe Goldfarb. Photo by Samantha Marble.
The Kraine Theater's good-sized stage gives visionary director Oliver Butler room to position the band on stage while leaving plenty of room for his captives to crawl about in the front. Butler's use of space is a subtle but important aspect of the play's power. So are Amanda Rehbein's set design and Sean Tribble's costumes. For example, while nearly all the action we see is interior to the characters – there is no graphic violence whatsoever – a simple costume change, from drab grey to orange jumpsuits, evokes what their captors are doing and what's going on in the wider world. The mere taking off of a cap turns a scary authoritarian figure into Jim's young son. A battered file cabinet lying on its side performs multiple duties as a prop that's both utilitarian and symbolic. Butler even uses to advantage the big difference in height between his leads.

"It'll never be another Rent," my theatergoing companion remarked, but she meant because of the subject matter, not the music. Another Rent is certainly not what Chapman and Jarrow meant to create here. It is, however, remarkable that within the show's horrific framework the time-honored threads of good theater vibrate strongly. The main characters' families are called forth. Played, in imaginative and imaginary scenes, by the solid supporting cast, they deepen our understanding of the fragile human beings Cheek and Thureen create so vividly for us. A relationship, almost a romance, develops. Though its central events are "ripped from the headlines," every other aspect of this production is blatantly artificial. The result, through the magic of art, is something forceful, disturbing, and hyper-real.