What do you do when all the good playwrights are gone and the present ones are dim? Go straight to hell, boys.

Apparently there is a classics craze going on in Manhattan these days, a Greek one. Perhaps in reaction to real world economic issues, we find solace and strength in old world masterpieces; The Iliad prepares to wage war at the New York Theatre Workshop, and Lysistrata opens up on Broadway as a musical. And speaking of Aristophanes, because, really aren’t we always when it comes to comedy, it became very clear during the croaking of the Frogs, a rarely produced comedy, that the Fault Line Theatre Company is making an impact in the cacophony of off Broadway theatre companies. 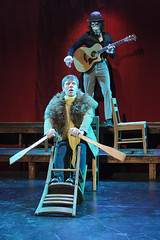 Although only in its second production, Fault Line, through ambition, talent and dare I say a dramaturg, is taking some old routines and never failing as the first line of Frogs goes. Their first effort was Doctor Faustus to a great reception. This time around is something only less weighty in that it is a comedy. But remember, comedy is hard! Musical comedy is even harder: “What do you do when the good comics are gone and the present ones are dim” and the European Union teeters? Sing and dance.

The basic plot of Frogs (sometimes called The Frogs) in case you missed that day of Greek Civ in college: the god Dionysus, who we usually think of as being the deity of drunkenness, puts on his crocus yellow scarf to be the god of drama. He tries to rescue the playwright Euripides from Hades (the afterlife) to “pull off some dirty work” as the Fault Line loosely translated text explains. The dirty work in question is rescuing Athens in the Peloponnesian war – heavy lifting for a playwright to try and stop the downfall of one of Western Culture’s great democracies (Are you busy in Heaven right now, Mr. O’Neill?)

Dionysus is played by the entertaining Haas Regan (above, rowing, with Craig Wesley Divino as a demonic Charon) whom I saw as a memorable Lady Bracknell a few years back. There is an archness to this performance, indeed to the whole production, but then again, this is a play with an undue amount of flatulence jokes, enough to make Two and a Half Men seems like a somber study in behavioral science. Perhaps archness is just what’s needed to balance out the scatalogical references.

The comic journey of god and servant (the mere mortal Xanthias played by the divine Blake Segal) culminates in the land of Pluto (Scott Raker) where a contest brews between the talents of Euripides and Aeschylus. Imagine, if you will, an Ancient Greece Has Talent and it’s all down to two playwrights. Sophocles, probably the playwright that is most well known to a modern day audience, is not invited into the verbal brawl because his resurrection would inconvenience his struggling writer of a son. Talk about the anxiety of influence.

Karl Gregory is the yummy character of Aeschylus. Aeschylus would probably not want to be described as yummy but his pomposity is delicious comic fodder, just ask any fan of Monty Python’s stuffy bureaucrats. Craig Wesley Divino is a yummier Euripides – all leather jacket and long Tom Brady hair with the added conceit of a Williamsburg inhabitant. The contest comes down to whose words are weightier, and to quote the playwright, I couldn’t stop laughing although I was biting my lip in two.

The rest of the cast includes a realistically substantial Heracles (Matt Clevy), Rachel Christopher as a Frog which isn’t as dubiously amphibious as it may sound, Rebecca Gibel as the Landlady, and Rudi Utter as Aecus, a kind of groundskeeper for Pluto. All work well together as a chorus whether amphibian or as the well-fortified Bacchanalians. 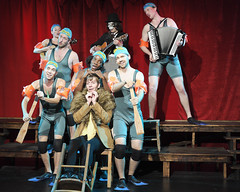 Making Frog into a musical has been done before. There is a Sondheim version with typical Sondheim music, something along the lines of Out of the Styx. Frankly, no matter how much that version protests, there is nothing adorable about Sondheim’s frogs. Here they actually are adorable: green Speedos, yellow goggles and fins. Comedy is hard to repeat myself, but it’s harder to dance in fins. The original music, by Eric Thomas Johnson, is pleasantly familiar in a show tune way but not cloying or cliche.

Under the direction of Aaron Rossini, who along with Mr. Divino and Tristan Jeffers are Fault Line’s originators, Frogs has lots of relevant, seemingly modern touches. Many of the cast and crew are recent graduates of Brown University’s Trinity Rep. While there, did they see “The Younger Generation, Scribbling away, churning out plays by the hundreds of thousands. Miles more words to the minute than Euripides.”? Is this the twitter generation that Aristophanes refers to?

"Rhombus represents the catalyst of change and she believes it's for all the good reasons."