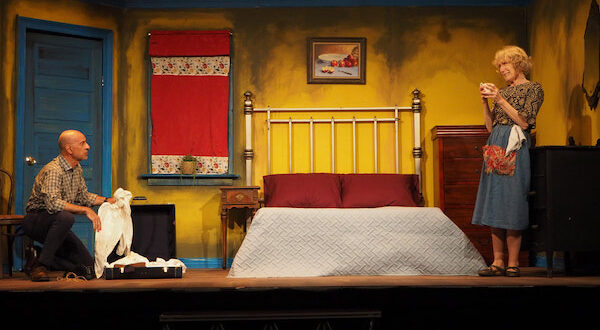 Photo courtesy of Out of the Box Theatre Company

Tennessee Williams’ short plays were a mixed bag, and so is Five by Tenn, an evening of them presented by Out of the Box Theatre Company. The company is dedicated to, among other things, opportunities for older actors. That works well for Tennessee Williams, as so often the great playwright’s work focuses on a person past their prime howling at life’s unfairness. Whatever the specifics of his protagonists’ disappointments, Williams had a keen sensitivity to the bruising that time can inflict, and an equally sharp, if romanticized, eye (and ear) for how American dreamers of a certain era might manifest their rage at the dying of the light.

Five by Tenn puts its best foot forward by starting with The Strangest Kind of Romance. This is the only one of the five selections that plays out in multiple scenes and works as a full, if short, one-act. The others are miniatures.

Beth Griffith is compelling as the middle-aged and as-good-as-widowed Landlady whose passions for life and love have nowhere to alight – except her newest boarder. The Little Man (an affecting turn by Franco Pistrillo) is an Italian immigrant and poetic soul whose existential alienation permits him to grow attached only to a cat he can ultimately neither care for nor tame and a woman who can never be his. Taking a factory job he can’t handle, he – as we used to say before we gained our modern-day sensitivity to mental health – cracks up.

The Landlady’s aging father observes the factory from his retirement, shaking his fist at capitalist greed and oppression. It’s an idea-mouthpiece role but Joseph Rose turns in a surprisingly convincing performance.

With better survival skills than her boarder, the Landlady can move on, if only by renting the Little Man’s room to a boxer (a small role but an engaging performance by Clinton Faulkner). We sense, though, that her dwindling feminine wiles won’t work on this bruiser. Having the strength to keep going doesn’t necessarily mean you’re going anywhere.

“Hello from Bertha” is the best of the miniatures, though that isn’t saying all that much. It has a fleshed-out title character and a fittingly ragged performance from Gloria Sauvé that has the aging prostitute going over the top while barely getting out of bed. (Harlan D. Penn’s simple set serves well with only minor adjustments from playlet to playlet.) Bertha brings to mind Williams’ more famous fading queens, though casting a Black actor here adds an interesting layer of unspoken commentary.

Racism is explicit, unfortunately, in “The Last of My Solid Gold Watches.” Aging salesman and casual racist Charlie Colton (Mr. Rose again) bemoans the vanishing of the world he used to know: “I don’t understand what happened!” as “us old-timers are disappearing fast.” The casting of an actor far too old as the “whippersnapper” who must absorb the old man’s rage is a small problem compared to the combined Stepin Fetchit/Magical Negro character of the porter. Frank Bowman gives as much dignity as he can to this anachronous double-offense, but it’s past time to put this particular miniature back in the miniatures cabinet for good.

As for “Talk to Me Like the Rain and Let Me Listen…” and “The Lady of Larkspur Lotion,” their casts can’t bring their (at best) thinly-drawn characters to life. Mostly disembodied musings and monologues, the plays don’t give actors much to work with. It would take something really magical to have made something of these.

That said, a little Tennessee Williams is good for the soul every once in a while. Five by Tenn runs through June 19 only. If no one’s staging any Tennessee near you, try TCM – they play A Streetcar Named Desire pretty often!

Tags out of the box Tennessee Williams

CES 2023: Technology Expanding in Every Direction