Do not be put off by the overtly provocative title. fuckplays is real theater and serious business – seriously funny, for one thing. The eight short plays that comprise it are all about sex, but unlike the real thing may do, they neither disappoint nor try too hard. It's an evening of real excitement, putting one in mind of headier eras in picturesque countries where live theater had the power to make audiences go nuts.

In the screechingly funny opening salvo, Joshua Hill's The Impotence of Being Ernest, two juddering fops transform a conversation with frank but unremarkable subject matter into sidesplitting absurdity. It's a hilarious demonstration of the way language, enlivened by razor-sharp acting, can make a scrap of conversation into something bigger and even more delightfully ridiculous than life.

Marriage Play by Bekah Brunstetter takes on the affection problems that married couples often develop, but places them in the context of gustatory gluttony and wide-angle humor. Erin McCarson and Jared Culverhouse are a sitcom couple boiled to the nth degree, randy and sad, voluptuous and touching. Their nostalgia for more innocent times leads them unexpectedly to a happy, absurd and silly breakthrough.

The production takes a sharp turn in Casey Wimpee's Arms and the Octopus. This remarkable play gives a wrenching twist to an Islamic terrorist's myth of heaven. As his joyous dream ratchets into nightmare, Amir (the agile, acidic Julian James Mohamed) is literally and figuratively torn apart by a trio of Sirens (led by the assured Kaci Gober) who Just Aren't Having It. Despite its serious subject matter, the deep, powerful little play maintains the manic energy that preceded it – as well as a measure of the humor, though here it becomes the scary sort. 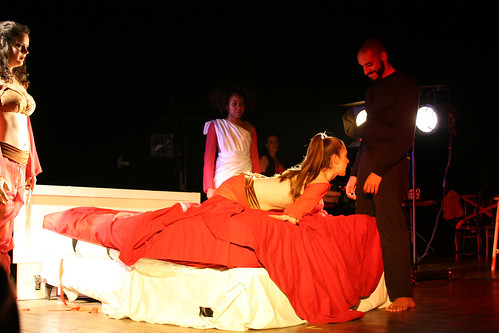 (L to R) Kaci Gober, Eboni Hogan and Elizabeth Kensek as the 'virgins' in Julian James Mohamed's harem in f**kplays at the Ohio Theatre and Galapagos Art Space, March 28-April 27, 2007. Photo by Reedfa.
Act One closes with an original and funny take on the games of intimacy and distance that lovers play. In Justin Cooper's Wood, a socially hapless ventriloquist (Steven Strobel) uses his… no, I can't give it away. But Amy Lynn Stewart is certainly one of the more convincing and entertaining nymphomaniacs you'll see on the stage.

The road gets a little bumpy in the second act. Greg Romero's Sharpen My Dick is like a little circus gone horribly wrong – it makes no sense, but it's funny and entertaining. Candy Room by William Charles Mery loses a bit of momentum as it sketches some stereotypical New York characters and relationships. Aiming for the quivering underbelly of vapid TV shows like Friends, it isn't sharply realized enough to hit the mark. Even so, it has some quite funny moments, and it has excellent music by Linda Dowdell.

The dark matter of Kyle Jarrow's noirish The Saddest Thing in the History of World is brightened by appropriately dry performances by Michael Mason and Elliotte Crowell. Its played-sort-of-for-laughs gore brings us to the evening's closer: Eric Sanders's gross, lunatic 1.1-1.7. Directed by Stephen Brackett, who recently did such an admirable job with the flawed Hotel Oracle, this crazily inventive two-character play is a miniature epic of nauseating foulness – and true love. Told in a stutter of short scenes, with nothing but plain words, between Richie (Cole Wimpee) and Donna (Nell Mooney) – two heroic performers – the play gives new meaning to the phrase "disgustingly sweet." Cathartic, nay, emetic, it's simply brilliant.

Bolstering the strong material and uniformly good performances is solid directorial talent. Each playlet has its own director, including some very accomplished ones like Thomas Caruso and NYIT Best Director Award winner Isaac Byrne. Equally important are the loose transitions, which create a celebratory atmosphere that makes the audience part of the show. All told, fuckplays is an embarrassment of seriously sexed-up riches.

fuckplays moves to Galapagos Art Space in Brooklyn starting this Friday and runs Fridays only through April 27. Tickets at SmartTix or call 212-868-4444.