All's well that ends well - except for poor Essex, of course.

Shakespeare's history plays not only dramatized the lives and deaths of some of Britain's most legendary monarchs, they have also had some influence on the nature of those legends. The playwright's versions of the likes of Prince Hal and Richard III are eternally bound up with the real histories of the personages they represent.

Given Shakespeare's huge and unparalleled accomplishment, one wonders what he might have done with the character of Elizabeth I, who reigned during his own lifetime. Though the Queen gave her name to the theatrical movement of which Shakespeare was the greatest exemplar – Elizabethan drama – Shakespeare and his contemporaries naturally could not, for political reasons if nothing else, put her on stage. (Unless you count her christening in Henry VIII!)

Still, Elizabeth was one of the most fascinating, larger than life, legendary figures in all of English history, and although another Shakespeare hasn't come along, writers of subsequent eras have dramatized her countless times — from the opera stage to television and everywhere in between. Outlandish and magnificent, Elizabeth's famed persona has also attracted some of our greatest actresses to the role, especially in the screen era, beginning with Sarah Bernhardt in the 1911 silent film The Loves of Queen Elizabeth. Her broad legend has been able to encompass depictions of many kinds: gritty and tragic (Bette Davis, twice); vibrant and opulently sensual (Cate Blanchett in Shekhar Kapur's two spectacular films); grandly comic (Dame Judi Dench in Shakespeare in Love); even ridiculous (Miranda Richardson in Blackadder, Series II).

Portraying Elizabeth on stage must be an even greater challenge. Stephanie Barton-Farcas, currently starring in Timothy Findley's new play Elizabeth Rex, proves she's fully up to it. Barton-Farcas is also the artistic director of Nicu's Spoon, which is presenting the New York premiere of this big, ambitious play. While Barton-Farcas may have absorbed nuances from some of the great screen performances of the past century, her Elizabeth is strong and distinct. 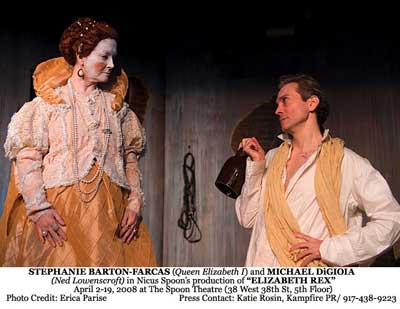 Playwright Timothy Findley took on an intriguing and challenging task with this play. The time is 1601. It's the night before the scheduled execution of Robert Devereux, 2nd Earl of Essex, a former favorite of the Queen's, to whom she had been famously, romantically linked. To prevent rioting by Essex's supporters, a curfew is imposed, which (in Findley's conceit) traps Shakespeare (Scott Nogi) and some of his company in the royal barn for the night. The players have just performed Much Ado About Nothing for the Court and they begin Act I in post-performance hyperdrive, joking and prancing about, quaffing ale and getting bawdy with their cockney costume mistress (Rebecca Challis).

Through a bit of contrivance Findley has Her Majesty herself turn up in the barn, attended by a young lady of the court (Melanie Horton) and the elderly Lady Anne, Countess of Henslowe (played in grandly droll style – even while asleep – by Broadway veteran Merle Louise). All hell gets pent up, only to break loose gradually as Ned Lowenscroft (Michael DiGioia), a player who specializes in female roles and is dying of "the pox," refuses to pander to the Queen. Instead he engages her in a dangerous emotional game.

Lowenscroft is sure there's a woman somewhere inside the icon, despite her having remained pure and unmarried for the sake of England. The Queen takes up the flamboyant actor's gauntlet, challenging him to show "the man" inside his effeminate manner. The process by which these two marvelous characters wear down each others' enamel is the play's dramatic center.

The rest of the characters are mostly "character roles," and the excellent cast has a lot of fun with them. There's a weakness or two, but this ensemble piece is a good deal stronger than its weakest link. Bill Galarno presents a heartwarming aging jester, while Oliver Conant as the Falstaffian Luddy Beddoes reminded me of deep-voiced British actor Brian Blessed. Andrew Hutcheson, who was so good in the company's Richard III last year, does a nicely understated portrayal of the big Irish leading man Jack Edmund, who's just played Benedick for the Queen but won't bow to her. (Ireland figured importantly in Essex's rebellion.) Sammy Mena has a remarkable turn as a bear – a wonderfully conflicted creature, half feral howling, half fearful hiding.

But it is Barton-Farcas and DiGioia who keep things focused, and it's well that they are so good, because after the fast pace of Act I, Act II begins to bog down. I believe this lies with the direction and not the play itself. The structure seemed strong; it was the slow pace that bothered me. It's a long drama (for modern audiences, anyway), and playing it slowly nudged some scenes towards melodrama. The play has enough meat to it; there's no need to give the actors license to chew.

All in all, all's well that ends well (except for poor Essex, of course). Unlike in a Shakespeare history, no one here dies on stage, at least.  This substantial and rather difficult play uses Shakespeare's milieu to gamely confront matters of gender and sexuality. Nicu's Spoon proves an excellent utensil for the task.