A modern production of Marlowe's bloody tale of Edward II, the Gay King.

Reduce we all our lessons unto this:
To die, sweet Spenser, therefore live we all;
Spenser, all live to die, and rise to fall.

Though considerably abridged, this new production of Christopher Marlowe's historical masterwork is generally well played, dramatically sound, and true to the fatalistic moral (above) spoken by the tutor Baldock at the end of Act IV.

At that moment Edward, though still technically the reigning monarch of England, has gone on the run from his rebellious land barons, who've become sick of the frivolous King draining the treasury to favor his relatively low-born companions. Who is still loyal to Edward? Who will betray whom? As always in English history, what will France do? Characters switch sides and switch back, from motives both honorable (occasionally) and base (usually) in Marlowe's bloody tale of the scandalous early 14th century reign of Edward II, the Gay King.

Marlowe's play remains popular and vivid after more than 400 years for two reasons. It is a great play, with language that at times rivals Shakespeare's. As important, it is one of the few great works of classical literature whose protagonists are, essentially openly, homosexual. (Marlowe, probably gay himself, didn't make this up; the King's proclivities appear to have been generally acknowledged in his own time.) But this production wisely takes the amorous nature of Edward's relationship with the Gascon knight, Gaveston, as a given, and stresses the more proximate cause of his downfall: power politics.

Power, if not politics, was lacking at the start of the performance I saw. It was only the second night of the run, so the weakness was probably attributable to jitters; after a few scenes, the cast found its rhythm and the bulk of the play ran smoothly. Jason Summers portrayed Edward initially as something of a psychotic, sort of a Caligula without the brutality. His love for Gaveston seemed at first more obsessive than heartfelt, his subsequent grief rather mild and stately. But as the King's torturous downfall accelerated, Summers found the passion behind Edward's vanity, and he had several big, heartbreaking scenes. Torn by the barons' ultimate demand that he relinquish his crown, his wail – "No, no, no, no," wrenched the gut marvelously. As Marlowe's stage direction goes: The KING rageth. And he doth. 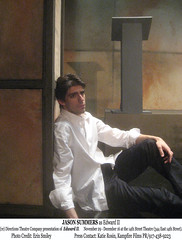 Nick Fondulis played Gaveston effectively as a sulky, childish rogue, even more vain than Edward and a flamboyant foil to the King's more tightly packed personality. He is a sensitive, showy brute who intrigues us without meriting our sympathy. Further over-the-topness came in the person of Spenser the Younger, whom Edward elevates to favor after Galveston's downfall, here played by Kristian Lazzaro with a shrill smarminess that amused at first but eventually grew a little tiresome. (Spenser the Elder was among a number of relatively minor characters dispensed with in this version.)

Casting women as several of the important lords (and having the characters played as women) worked nicely and even added a bit to the intricacies of the story's sexual politics. It also provided an opportunity for costume designer David Withrow to display his cleverness. All the costumes, in fact, were impressively inventive. Withrow combined an assortment of pieces of modern couture into garb that no one ever wore in real life but still suggested archaic courtly dress.

Neither a period nor a modern-dress Edward II, the production felt lifted out of time. Queen Isabella's purple dress was luridly beautiful; Gaveston's leather-and-chains outfit was a glorious sight gag; and the murderer Lightborn's terrifying get-up made the play's climactic killing all the more dreadful. (Cary Hite displayed notable range, appropriately chewing the scenery as the terrifying assassin and also as the cowed Bishop of Coventry.)

Royal announcements were staged as press conferences; amusing TV news broadcasts filled us in on some of the off-stage (or elided) action; a grand, modern-style conference table served as all-purpose scenery and furniture; and effective lighting and sound effects carried us neatly through battles and chases. Director Tom Berger has come up with a conception of the classic play that's both modern and true.