The Hipgnosis Theatre Company's new production of Bertolt Brecht's The Caucasian Chalk Circle has made me look at the play with fresh eyes. Despite its uproariousness, it is often perceived as a "difficult" piece to stage, and it's not revived frequently in New York. Those who see this version — and I hope as many as possible do see it — are likely to come away with an expanded, or at least a fresh, appreciation for the vibrancy of Brecht's vision, and an equally strong admiration for Margot Newkirk's exuberant staging and the cast's excellence.

In the murky past of the Caucasus — the region, centered around the present country of Georgia, that straddles Europe and Asia — a rebellion by the corrupt "Princes" (wealthy landowners) and other malcontents overthrows a greedy but better-liked government. In the ensuing civil disorder, a kitchen maid from the household of the executed Governor finds herself caring for her former master's baby son. Fleeing through the countryside, Grusha dreams of reuniting with the young soldier she's agreed to marry, but, after several adventures and close calls, ends up having to wed a brutish, supposedly dying farmer in order to hide herself and the child from the new regime's terrifying yet ridiculous "Ironshirts" – greedy soldiers who want to get their hands on the reward money for finding the former ruler's heir.

Money and property and the corruption they engender are both the engine and the grease for the story, which certainly reflects Brecht's interest in the structure of societies and the advent of Communism. (Brecht wrote it in 1944 in the US.) His generous, if somewhat unorthodox talent and vision for drama, provide an opportunity for great stagecraft, and here they are richly realized.

Newkirk uses in-the-round staging effectively, blocking scenes every which way, molding the actors' grand, exaggerated motions and declarations into a spectacle of elevated pathos, nutty humor, and all-too-human absurdity. The thirteen actors enter and exit on all sides as they ably cover all 80-odd roles. The sonorous acoustics of the Bleecker Street Theatre's downstairs space, together with the actors' clarionlike vocal projection, ensure that audience members don't miss lines that happen to be directed away from them.

I never cease to be impressed by the depth of acting talent (and singing and dancing talent) in New York City, but taken as whole, this group is the best large cast I've seen in quite some time on an Off Off Broadway stage – or Off Broadway, for that matter. It's led by musical director and composer Demetrios Bonaros, a subtle but commanding performer who plays the Singer, a musical storyteller and narrator. Bonaros has put the play's many song lyrics to new tunes. A few are sung in lovely multi-part harmonies; many he sings by himself in a penetrating, concert-worthy voice. Other cast members, to my ongoing surprise, sang just as well as they acted, some equaling Bonaros in vocal prowess and skill.

The director and musical director, along with choreographer Kimberly Braton, take full advantage of the song-and-dance aspect, using it to intensify and oversize the fable much as I think Brecht intended. There are no instruments, just voices, but no help is needed. For that matter, there is no set – just a big space and a few props. This staging allows the actors to create the world of the play through pure human presence. 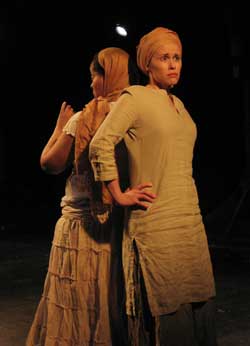 The most important presence is that of Grusha, played with sensitivity and bravado by the unsinkable Rachel Tiemann. Inspired, by the basic feelings of compassion and loyalty, to feats of endurance, bravery, and sacrifice, the servant-turned-heroine bears most of the story's moral weight, and Tiemann is easily up to the task, moving with ease from glacial defensiveness (with the humor that implies) through fear and humility. John Castro is a delightful, snoring Fat Prince, and John Kevin Jones mesmerizes as the grandiloquent, increasingly drunken judge Azdak. Ayana Siverls strides proudly and funnily through her travails as the Governor's vain widow, while Matthew Kinney is hilarious as (among other roles) Grusha's cowardly brother.

Richard Ugino is the best kind of ham, Elizabeth Mirarchi has a beautiful voice… I could go on, but this would get boring. They're all good. An episodic play like this can be a challenge for actors, with new, important characters appearing late in the action, or for discrete scenes, some never to be seen again, yet all needing to be made real. Brecht's brilliant writing — here in the original translation, to which W. H. Auden contributed — makes the structure workable; the present company's great cleverness and enormous talent make it pulsate with the outsize, exaggerated energy of real life.

Given all that, one might, on first consideration, wonder if the production mutes Brecht's political message in favor of physical comedy and sentiment. I think, though, it's in the power of the story itself, and especially in this brash telling, that the message comes out most forcefully: compassion has the potential to confront, mitigate, even surmount the greed and graft that underline human institutions. "Didn't send enough troops. Embezzled funds. Brought sick horses." Such lines don't need to be overstressed for us to get the ongoing relevance of Brecht's point about corruption and war profiteering; it's in the story as a whole, together with its opposite – the power of compassion. This staging is a brilliant expression of Brecht's wide-angle vision.