Big names go a long way. Multiple-Oscar winner Ethan Coen is so big right now, especially after No Country for Old Men, that success has seemed almost a foregone conclusion for his Off-Broadway debut as a playwright. (Foregone in New York, anyway, where we especially love our Coen Brothers for living here and not in Hollywood.) With F. Murray Abraham and Mark Linn-Baker heading up the cast, the play would have had to have been quite bad to fail.

Almost an Evening is a triptych of short, funny plays that deal with deep matters in a consciously shallow manner. Together they constitute an enjoyable but very slight "almost evening" of theater that, without the big names attached, probably wouldn't have had the legs to move from its original Atlantic Theater Company home to its new, larger Bleecker Street home.

In Waiting, a nebbish-everyman (Joey Slotnick) waits, and waits, through a comic version of a bureaucratic nightmare. Slow-paced, it feels like a 78-rpm Monty Python sketch played at 33 1/3, with a tiny plot like those old-fashioned multi-panel New Yorker cartoons.

In the closing play, Debate, the primal, foul-mouthed God Who Judges (Abraham) and the buttoned-up God Who Loves (Linn-Baker) "debate" sin and man's relationship to God. 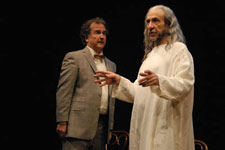 Absurdities ensue, some silly, some clever. Abraham's thundering Jehovah is hilarious, like George Carlin in his prime but even rougher. It's a real treat seeing these two masterful actors spar. Not much of a play, though. Which is not to imply that it claims to be. Far from it, as the later scenes make clear.

In terms of stagecraft, the middle piece, Four Benches, is the best. Unlike the other two, which play quite smoothly, it is written and directed awkwardly. It's sketchlike. A central scene is too long. 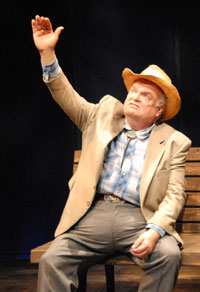 But, though funny, its humor depends less on "business" and more on character, and it has a touch of of the dark quality that pulses through the Coen Brothers' films.

It's a fairly simple story of a disenchanted British spy (the superb Tim Hopper) searching for more meaning in his life. There's a real plot involving characters with some depth. It's a truism, with an emphasis on the "true," that a character growing and changing before us is what really draws us into a drama. Or a comedy, for that matter. Even if that change is practically all that happens, theater happens.

Almost An Evening runs through June 1 at The Theatres at 45 Bleecker Street.