Jon Sobel May 25, 2007 Comments Off on Theater Review: North of Providence in New York City 105 Views

It is unusual for a one-act play that runs less than an hour to be given its own production, especially in New York City, where production costs are enormous. Edward Allan Baker's North of Providence, however, now in a revival by Small Pond Entertainment at Altered Stages, earns its focus. It's a well directed and powerfully played full evening's worth of drama in a single act.

Before I discuss why the play is worth seeing, I must mention a few doubts of which I am giving it the benefit. Perhaps because it was the first preview, the cast of two took a while to find the rhythm of their dialogue. The script is weighed down a bit by some awkward explication during its slow-build set-up. The otherwise excellent Chad Meador drifts in and out of a North Providence dialect that he hasn't mastered anyway (Yvonne Roen has a better time with it).

Meador and Roen, as directed by Glory Sims Bowen, barrel through these distractions to bring Baker's prickly, tightly wound family drama to life. The plot is basic: struggling, with some success, to make a good life for herself and her family after being dealt a poor hand, Carol returns to her parents' run-down home to try to convince Bobbie, her only brother in a family of sisters, to come to the hospital where their father is dying. 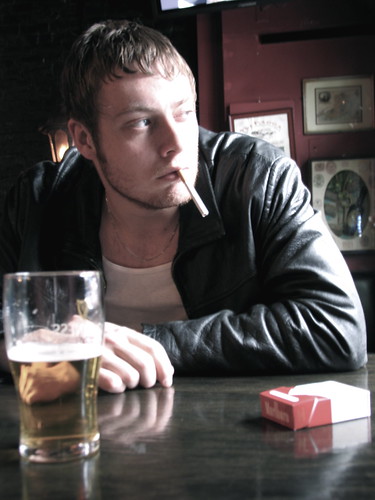 Chad Meador in North of Providence
As Carol tries to break through to her brooding, dismissive, and none too articulate sibling, baring her soul in the process, we come to learn what lies behind the anger (and the love) that drives her. Even more dramatically, we, along with Carol, learn the devastating secret that has turned Bobbie into the drunken, possibly suicidal recluse who won't visit his dying father and thinks nothing of swiping the cash from his sister's purse.

The bedraggled one-room set effectively mirrors both the disintegration of the family and Bobbie's claustrophobic, drink-addled life. A musical soundtrack evokes the mid-1980s setting, but the story could be taking place anywhere, and almost anywhen, in America. Unfortunately New York is the only place you can see this production. But that's the nature of theater – you, and the actors, have to be there. And your reward for showing up is to feel the floorboards shake, smell the aftershave, and be touched in a way that can never quite happen at the movies.