Dr. Feldberg needs a date so no one will guess he's Gary's therapist.

Theater Review: I’m in Love with Your Wife in New York

Alex Goldberg's new farce I'm in Love with Your Wife doesn't quite know how far over the edge of absurdity it wants to go, but it has a lot of fun sort of not quite going there. An excellent ensemble cast under the direction of Tom Wojtunik happily, and for the most part nimbly, sends up love triangles, modern angst, celebrity worship, psychotherapy, and even life as a struggling actor.

The play is made up of three sections, the first of which is a fast-paced, near-perfect comic gem. Gary, an overworked schlemiel of an insurance adjuster, just wants to get some work done. Persistently interrupting his drab day are his demanding wife (via telephone) and his gabby assistant Bethany, and later his smooth-talking friend Paul and, separately, Paul's steamroller wife Gail. Both of the latter have disturbing personal news for the hapless Gary. Naturally, zaniness ensues.

Gary is played by craggy beanstalk Ean Sheehy, who clearly relishes the role of straight man and victim of circumstance. His pained reactions as his character's life spins out of control are hilariously hyper-real, and stop just short of becoming distractingly sad.

The second scene brings Gary to his psychotherapist's office. Dr. Feldberg is played by Ron Palillo of Welcome Back, Kotter fame, whose famous ditzy nerd persona has matured (if that's the right word) into a boisterous, middle-aged nebbish resembling a less hyperactive, but slightly insane, Woody Allen. Simultaneously a quack and not a quack, Dr. Feldberg thinks Gary's tales of his absurd life are delusions. 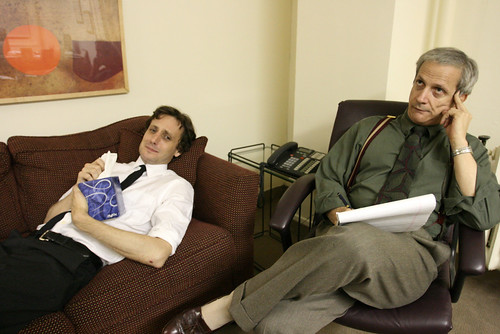 Ean Sheehy and Ron Palillo in I'm in Love with Your Wife
Gary convinces the therapist to come to a dinner party with Paul and Gail to observe the craziness firsthand. But Dr. Feldberg needs a date so no one will guess he's Gary's therapist. Enter Ruth (the delightfully showy Marion Wood), a struggling thespian desperate for an audience. The final scene, naturally, is the dinner party, where Gary's too-foxy wife exerts her over-the-top magnetism over all concerned. Zaniness ensues.

Monica Yudovich as Bethany shows what a gifted comedian she is, and Shane Jacobsen hams up the role of Paul with infectious energy. Katie Kreisler makes Gail a dynamo of cinematic haughtiness, updated for an age of unrestrained sexuality. Half Ellen DeGeneres and half Mo Gaffney, she's a towering, rock-solid presence. Of zaniness, of course.

Thanks to tight staging, a confident and generous cast, and a democratic script full of dizzy twists, this quick-witted piece revels in its shallowness, and a good time is had by all (except Gary).

Through August 3 at the Jewel Box Theater in New York City, but don't wait because there are only a handful of performances left. Part of the Midtown Theater Festival. Tickets at SmartTix or call (212) 868-4444.