The whole thing with the Post-It notes is, let's just say, highly original.

Bixby Elliot's new play Hotel Oracle starts with the standard fictional convention of putting a group of seemingly ordinary strangers into an extraordinary situation. Here, though, it's not a disaster or a crime, but a fantastical grafting of ancient myth onto modern life. A group of travelers, hoping for answers to their Big Questions from a mysterious modern sibyl, reveal their troubles and motivations as they get to know each other.

The play has a number of well-written and powerfully staged scenes, some of which are very funny. Interesting dramatic ideas, wonderful set design by Nick Vaughan, and a good cast conspired to make me really want to like the play. But it's a jumble. Elliot has tried to cram in so many ideas and inspirations that the play loses focus and leaves us with unanswered questions – not the ineffable kind, but the plot-related kind that we normally expect to have answered.

At one moment we seem to be in the "real" world of modern science and The New York Times, and the next there seems to be a fascist dystopia out there. Modern medical explanations for religious visions, as exemplified by the brilliant but mentally unstable Lucy (Tessa Gibbons), are fascinating, but what do they have to do with the half-absurd, half-mysterious Oracle that actually figures in the play? The hotel clerk (the charming Paul Keany) has an interesting hobby, but is it supposed to map in some way to the story of Orpheus and Eurydice? Unclear. 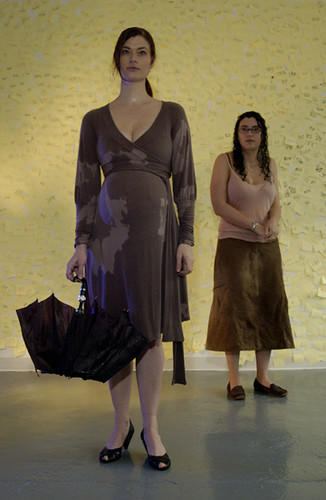 The playwright's potential, the actors' abilities, and director Stephen Brackett's careful sensitivity are evident in a number of places, such as the masterfully comic early scene between the nosy, pregnant Angie (the fabulous Katie Honaker) and the lonely reporter Madeline (Deb Martin); the truly scary ending of Act I; and the powerful and tricky piece of stagecraft in which Mack, the con man (Jim Kane), bares his difficult, angry soul. Angie's monologue about why she's afraid of the water is a brilliant showcase of both Elliot's sharp ear for the rhythms of speech and Honaker's magnetic and elastic talent. And the whole thing with the Post-It notes is, let's just say, highly original.

This is the work of a playwright with a quiver full of penetrating arrows who – in this case, at least – just needs better aim.