In which Timmy creates the Universe.

Creation: A Clown Show is just that: Lucas Caleb Rooney, playing a childlike, imaginative naïf, clowns through a depiction of the Book of Genesis's creation story using props, lights, sounds (many emitted by himself), and music.  The music is played sparingly by Peter Friedland and Javen Tanner like an orchestral Vladimir and Estragon on drums, bass guitar and ukelele. Unlike Harpo Marx, Rooney's clown also speaks – more than the mostly silent Mr. Bean, but less than the hyperkinetic Pee Wee Herman – in a magnificently facile voice that he uses almost like a musical instrument. 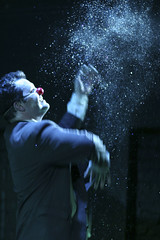 Antically he resembles some of the above-mentioned clowns of the past, but he has his own teddy-bearish clown persona- mugging, banging about, alternately asking the musicians for help and bossing them around. In the process, he charms and entertains the adults in the audience at least as much as the children. As the text is read by a booming, sometimes exasperated offstage voice (Samuel Stricklen), our hero must by hook or by crook (or by hammer and nail) demonstrate the events of the six days of Creation. The point is not whether he succeeds but how he uses his imagination to cast off his initial shyness and fear to become a crowd-pleasing storyteller.

Underneath, it's a tale of growing up a little and finding one's voice a lot. On the surface – and what a delightful, madcap surface – it's a smartly paced, inventive, musical, altogether first-rate family entertainment.