This story isn't about existential angst or alienation - except from the truth.

It’s one of the oldest dramatic tricks in the book: family or community has a deep dark secret; stranger or prodigal son comes to town, kicks up dirt; secret comes out, and devastation (or newfound freedom) ensues. Sam Shepard rode this old horse to his first mainstream commercial success with his 1978 play, Buried Child, which won the Pulitzer Prize and is now recognized as a landmark of American theater.

But if you’d seen only the current production by the White Horse Theater Company, you wouldn’t peg the play as a classic, or even as a lesser work by a great writer. Staging Buried Child requires balancing modernistic touches of absurdity and magic realism with ancient depths of emotion, and artfully mingling humor and gloom. In spite of the presence of some good elements, the whole of this production fails to powerfully connect, and the fault lies mainly with the staging.

The individually excellent cast, led by Bill Rowley as Dodge, the family patriarch, isn’t directed so as to create the emotionally stifled atmosphere the play would seem to call for. There really isn’t much of an atmosphere at all, in fact (notwithstanding the homey set and evocative lighting). The famous opening scene, where Dodge’s wife Halie (Karen Gibson) harangues him at length from offstage, starts off funny and touching but then seems to drag on forever; the same painfully slow pacing continues throughout the play, contributing to the unwanted sense that each character inhabits a separate world. Shepard isn’t Beckett; this story isn’t about existential angst or alienation – except from the truth. 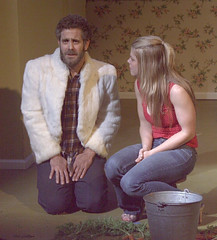 The family is certainly not what you’d call a “functional” one, but it is supposed to have made at least some sort of uneasy place for itself in the wake of past tragedy; yet, with the partial exception of Dodge, its members don’t convey here the sense of dull sorrow or resignation that would make us care about them.

The monkey wrench in Shepard’s story is the arrival, after six years’ absence, of grandson Vince (Chris Stetson) with his girlfriend Shelly (Ginger Kroll, whose embodiment of terror, confusion and smarts is quite wonderful). When the family mysteriously fails to recognize Vince, he storms off, leaving Shelly to cope with crotchety Dodge and his half-lunatic eldest son Tilden, who keeps bringing in mysterious crops from a field Dodge hasn’t planted in decades. Second son Bradley (David Look) seems to move in another universe entirely – we’re not even sure why his character exists, and Look’s one-note performance doesn’t help. (Whether his furiously shouting every line was an actor or director’s choice, it was a bad one.)[ADBLOCKHERE]

Returning in the third act, the game and talented Stetson delivers Vince’s monologue with conviction, but in a vacuum – we don’t care about him, either, so the audience’s ears are nearly as deaf to his passion as are those of his wrecked family.

Director Cyndy Marion has staged well-received Shepard productions in the past and is evidently something of a specialist in the playwright. But, in spite of the good performances, this Buried Child has too little of Shepard’s sense of creepy mystery and witty snap.

Presented by the White Horse Theater Company at the American Theater of Actors in New York City through Feb. 12, 2006.