A noirish thriller that grabs you by the emotional jugular and doesn't let go for a second.

The New York International Fringe Festival, in its tenth season this summer, included over 200 productions by companies from all over the world. Moby Pomerance’s new play Broken Hands was the only one to win two major festival awards, and deservedly so. It’s back for an extended run through Sept. 21. Catch it while you can.

The longish one-act play concerns two brothers trying to get by in London’s East End during in the 1950s, when England was still in the grip of postwar economic hardship. Mick is a mentally challenged boxer who, managed by his brother George, earns enough to keep the pair alive. When one of George’s schemes crosses Scratch, the boss of the boxing racket — played with delicious sliminess by Tom Souhrada — Mick is left at the mercy of Scratch and his gang. It’s a noirish thriller that grabs you by the emotional jugular and doesn’t let go for a second.

Anchoring the excellent cast is Cory Grant, who won the Fringe 2006 Outstanding Actor Award for his portrayal of Mick. Although the role resonates with notable fictional naïfs of the past, from Frankenstein’s monster and Of Mice and Men‘s Lenny to “Mountain” Rivera and Arnie Grape, Grant’s fierce performance — confused, halting, enraged — is its own wonderful animal. Eric Miller’s George embodies the linked love and frustration that claw at the soul of a family member forced into a caretaker’s role; Constance Zaytoun is convincing in what could have been a too-clichéd moll-with-a-heart-of-gold role; and Chuck Bradley brings a wide-eyed, fearful optimism to the scrappy young caretaker Scratch assigns to Mick. 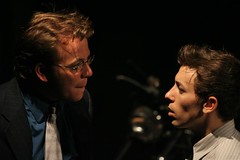 The fine ensemble work from this excellent cast owes quite a bit to Marc Weitz’s sharp direction and to Pomerance’s electric script, which earned the play the Fringe 2006 Outstanding Playwriting Award. The fast-moving plot, shifting time frames, and Cockney accents require close attention, so come wide-awake. But do catch this play if you can — it’s a prime example of the top-notch affordable theater New York City offers.

The FringeNYC Encore Series presents a limited number of performances of Broken Hands through Sept. 21 at the Lion Theatre in the Theatre Row Complex, 410 W. 42 St., NYC. Tickets are $18. Call 212-279-4200 or visit Ticket Central online.