Theater Review: bombs in your mouth at the Fringe Festival, NYC

Jon Sobel August 11, 2007 Comments Off on Theater Review: bombs in your mouth at the Fringe Festival, NYC 84 Views

The premise is right out of Playwrighting 101: kin gather after a death in the family, the past is dredged up, sparks fly. In the one-act variant, it's two siblings who clash over past wrongs, and then, if they're lucky, one or both shucks off a rotted skin and emerges into a fresh phase of life.

Something told me Corey Patrick's take on this old trope would rise above cliché, and I was right. bombs in your mouth (sic) is a jewel of a play, laugh-out-loud funny and slyly touching.

Transparently directed by Joseph Ward, and beautifully acted by the author and the wonderful Cass Buggé, the play finds half-siblings Danny and Lilly reunited, after six years, in their Minnesota hometown upon their father's death. Danny, who has taken care of the old man through a slow and painful mental decline, naturally resents Lilly for having decamped to New York for a glamorous advertising career.

The demon is in the details, which Patrick and Buggé slowly reveal during a series of scenes powered by alcohol, anger, infantile banter replayed from childhood, and a revelatory roll of toilet paper. The concept of the story may be tried and true, but the execution is thoroughly up-to-date. Most important, the actors inhabit their characters so thoroughly, and execute Patrick's prickly, raunchy dialogue so seemingly instinctually, that there's hardly a moment in which the audience feels detached from the action. 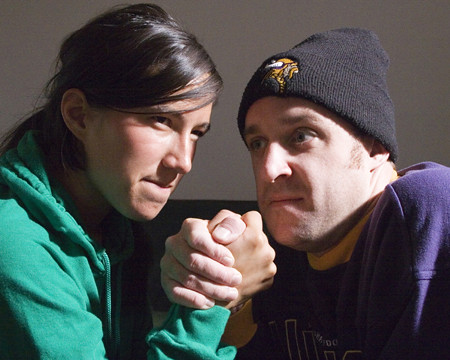 Cass Buggé and Corey Patrick in bombs in your mouth. Photo by John Scott.
Danny, the pugilistic, working-class Bob Newhart, and Cass, the nattily dressed and icily sexy Upper West Side stinging nettle, couldn't be more different on the surface – they don't even look related – but completely convince as a typical modern family distilled to the nth degree of humor. They have just one parent in common, and have taken very different paths, but retain their familial resentments and a hint of love in spite of themselves. Cass's unexpected revelations about her mental state and her career and Danny's tales of their father's decline work as plot devices the way shocks and car chases do in a good action movie.

What we learn about the characters may be dimly rooted in the past, but the meaning behind the action is refreshingly present. The now, not the then, is what draws us in. That's what makes Patrick's take on this old story new. Brought to life in this excellent production, it's the best two-character play I've seen since Trevor Ferguson's Zarathustra Said Some Things, No?, and a distinct highlight of this year's Fringe Festival.

At the Cherry Lane Studio Theatre in New York City. Performances through August 24. Tickets online at the Fringe website, or call 212-279-4488 or 888-FringeNYC (outside NY).

Austin Butler's genuine effort to honor The King of Rock and Roll is undermined by director Luhrmann's stylistic excess and a truly terrible turn by Tom Hanks.