It is a rare artist whose life truly becomes her art.

Theater Review: Anaïs Nin: One of her Lives

Australian playwright Wendy Beckett directs her play Anaïs Nin: One of her Lives at New York City's Samuel Beckett Theater in a limited engagement this month. Like her distant relative for whom the theater was named, and like most artists, the prolific Beckett aims to be known through her work. There are others who, though perhaps intending to become artists, actually achieve fame because of how they live their lives. 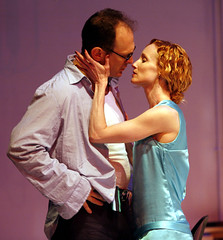 If the examined life is worth living, Nin's must be valued as considerably more than her weight in gold. The erotic content of her writing (and of the life upon which so much of it was based) can tend to obscure her artistic accomplishment, but in the end it was her life itself that became her greatest work, making her story ripe for telling and retelling. From Deidre Bair's scholarly and popular biography to Philip Kaufman's exploitative film Henry and June, Nin's life story, particularly her time in Paris in the 1930s with Henry and June Miller, has become part of popular culture.

Beckett evokes Nin's own language – perfumed as it was with both flowers and pheromones – in the literate, emotional dialogue she gives to the triumvirate in this stylized but passionate and sexy staging. A little over an hour and a half suffices to relate, primarily from Nin's (Angela Christian) and secondarily from Henry Miller's (David Bishins) points of view, the story of their encounter, the famous menage-a-trois, and its breakdown. Interspersed are scenes of Nin's visits to the psychoanalyst Otto Rank (Rocco Sisto), which at first seem a little gimmicky, but which culminate in a powerful scene in which patient and therapist switch positions. Rank's personal confessions throw added light on our heroine's struggle to create work that matters while constructing a life worth living.

Christian centers the talented cast of four. Whether getting drunk and succumbing to June's seduction, trading passionate readings with Henry, or casting out her prodigal father in a scene that plays like a dream sequence, she's so focused we believe every second of her portrayal. The actress's diminutive size seems to concentrate the extraordinary life force that made Nin the object of Henry's and June's affections and the literary world's fascination, not to mention energized her into keeping two husbands simultaneously for many years. (Her West Coast mate, Rupert Pole, died just days ago at the age of 87, putting Nin back in the news just in time for this production.)

As glamorously portrayed by the tall, slinky Alysia Reiner, June Miller at first overwhelms Nin with her coarse American lust for life, but Nin's own quieter animating force proves a match for both Millers. Bishins's Henry explodes on to the stage with a fiery magnetism, reminding one of John Malkovich's entrance in Burn This but also of the cocksure New York attitude of the young Bruce Willis in the TV series Moonlighting. At times he overdoes the dissonance of poetic language and street-tough machismo, but one appreciates the dangerousness of his performance as a needed foil for Nin's softer power.

Perhaps particularly in a play about writers, there is a risk of telling instead of showing, and the play's one real flaw is that Beckett partially gives in to this temptation. The middle of the story seems to drag as Nin's psychology gets explained instead of dramatized. But for the most part the elements of the play – the gritty performances, the captivating language, the outsize personalities, the beautiful rose-colored set strewn with books and bottles just screaming "I'm Paris, live in me!", the evocative lighting – make this an effective and worthwhile evening of theater.