In Latin America and Europe combined, approximately 250,000 bulls die each year. Do these bulls fall prey to a deadly virus, perhaps? Far from it. The bulls are tortured and killed for the sake of entertainment. Have we evolved at all since the Roman times?

Latest polls show that over 72% of Spanish citizens have no interest in bullfighting, yet, because of a small group of influential people in Spain, this inhumane tradition is being kept alive. Fortunately, in Europe and Latin America a growing segment of the population is standing up against bullfighting and calling for an end to this cruel spectacle.

Here to talk about bullfighting and what we can do to help is Alyx Dow, Programmes Officer (Anti-Bullfighting) for the World Society for the Protection of Animals (WSPA).

Thank you for this interview, Alyx. Could you start by giving us some historical information on how bullfighting began? What is its origin?

There is not much specific information on how or where bullfighting began, but it is thought to date back to Roman times when many different species of animal were killed for the sake of entertainment in public arenas.

Bulls were also sacrificed for religious purposes and more recently, bullfights were (and often still are) held on Sundays, as part of Christian Saints festivals. 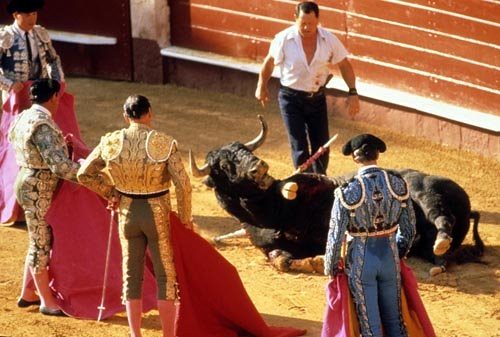 Within Europe, bullfighting can be found in Spain, France, and Portugal. Approximately 40,000 bulls die in bullfights every year in Europe.

Does bullfighting differ according to the country? If so, in what way?

There are three types of bullfighting ‘styles’ – Spanish, French, and Portuguese. The Spanish version is the most common across both Europe and Latin America. Bulls die in both the Spanish and Portuguese versions, although in the Portuguese style it happens behind the scenes, after the bullfight has finished. The French style does not lead to the death of the bull but is also very stressful for the animals involved.

A lot of people ignore what really happens during a bullfight. They have a simple, even romantic image of a torero taunting a bull and of one final thrust of the sword bringing death to the animal. What exactly takes place during a bullfight?

In the Spanish style, which is the most common, there are three stages:

1. After the bull enters the ring, toreros wave capes so that the bull charges several times. This is followed by the entrance of the picadors on horseback, who drive a long spear into the bull's back. Both of these short stages are designed to tire the bull and weaken its neck and shoulder muscles, causing it to drop its head. There is also a significant risk to the horses involved – although they wear padding, the experience is very stressful for them and can cause serious or fatal injury.

2. Men called banderilleros enter the ring and use weapons called banderillas (colourful short spears with harpoon ends) which further weaken the bull when they are stabbed into the top of the bull's back. By this point the bull has lost a significant amount of blood and is exhausted. 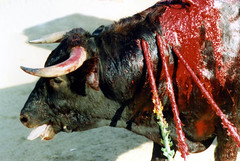 3. The matador enters with a cape and sword. Tiring the bull further with several runs at the cape, the matador thrusts the sword through the bull's back, with the intention of severing the aorta. The sword often misses, piercing the lungs and the bull drowns in its own blood – as can be witnessed when bulls are often be seen with blood pouring from their nose and mouth at the end. If the bull does not die quickly, a small knife is used to sever its spinal cord at the neck. If the crowd deems it a ‘good’ kill, the matador is ‘awarded’ the bull’s ears and tail which he cuts off himself (the bull is often still alive during this).

The whole process takes approximately 20 minutes – and the bull suffers an agonizing and torturous death.

In spite of bullfighting being a cruel and inhumane tradition, many people — not only Spaniards — watch this spectacle. Why do you think this is and what does this say about human nature?

Within bullfighting countries there is a small but strong following that keeps bullfighting alive, largely based on the claim that it is part of the country’s culture. All bullfighting countries have a fascinating history, with a rich culture that they should be proud of. However, evidence is showing us that most citizens of these countries do not want animal cruelty to be part of their heritage. Just as with the ban on fox hunting in the UK, citizens are speaking out about the importance of animal welfare over an archaic ‘tradition’ that is neither necessary nor humane.

The latest polls in Spain show us that over 72% of Spanish people have no interest in bullfighting. This climbs to over 80% in the autonomous region of Catalonia. Anti-bullfighting sentiment is growing across Europe and Latin America – people are standing up against the protection of bullfighting as part of national heritage and calling for an end to this cruel spectacle.

Furthermore, the WSPA believes that culture is no excuse for cruelty, no matter where in the world it happens or the rationale behind it.

Unfortunately a huge amount of support also comes from tourism; again because tourists are led to believe that bullfighting is part of a particular country. They are unwittingly supporting a dying industry that thrives on the torture of an animal: many leave the fights shaken and disturbed by what they have witnessed, which is, simply, animal cruelty for the sake of entertainment.

What arguments do supporters of bullfighting use to defend their tradition?

They use many arguments to defend the spectacle, mostly in reference to culture and the economy. You can read more on these ongoing debates at Bull-Fighting Free Europe, a website sponsored by WSPA and ten other animal protection groups across Europe.

What is the WSPA doing to end bullfighting? Have there been any significant developments in the last few years?

In Catalonia, WSPA is running its Culture Without Cruelty campaign with member society ADDA, and there have been a series of successes in the region in recent years. Forty-seven towns, including Barcelona, have declared themselves anti-bullfighting. You can sign our petition, calling for a ban on bullfighting in Catalonia.

In Spain, WSPA is supporting work done by member society Stop Our Shame who are working to end the national subsidies (funded by Spanish taxpayers) given to the bullfighting industry, which total a staggering 530 million Euros a year.

In France, three towns have recently declared their anti-bullfighting status. You can find out more at Anticorrida.com.

WSPA is also working closely with an alliance of ten other animal protection organizations from across Europe to tackle the issue at European level. The EU currently gives subsidies (funded by EU taxpayers) to breeders of fighting bulls, as part of its annual agricultural subsidy system. We recently held a series of events in Brussels at the European Parliament to highlight this issue and call on Parliamentarians and the Commission to end these subsidies. You can find out more at Bull-Fighting Free Europe.

In Latin America many of WSPA’s member societies are working towards bans of bullfighting across the region. The first two anti-bullfighting towns in the region have recently been declared: Baños de Agua Santa in Ecuador and Zapatoca in Colombia. In Medellin, Colombia, the first ever group of anti-bullfighting city councilors has been established. You can keep up to date with the latest developments on the WSPA International website.

What is Spain’s position?

In Spain, there is a small group of powerful and influential people behind the bullfighting industry that are keeping it alive. Bullrings are suffering from declining attendance and a lack of patience from the public in terms of its increasing awareness of animal welfare. Unfortunately, government officials often hesitate to speak out against the spectacle; as was the case a few years ago with fox hunting in the UK. However, the Spanish people are telling us they have had enough, as shown in Catalonia and the Canary Islands (who have also banned bullfighting), and by the recent banning of the broadcast of bullfights on state TV, following the assertion that it is too violent for children. We think it is about time that the government listens to its citizens and ends bullfighting for good in Spain.

Do you see Spain making bullfighting illegal any time soon?

Based on public opinion polls that have been done, dwindling attendance at bullfights as well as the achievements in recent years in getting anti-bullfighting declarations, we are confident that bullfighting is a dying industry that is destined to be banned in the near future.

Is there a way bullfighting could be modified to become a humane practice?

No; the practice would still involve placing an animal into an unnatural situation that causes the animal stress and anxiety, for the sake of entertainment. WSPA wants to see an end to bullfighting worldwide, in all its forms.

What can Spaniards do to help stop bullfighting in Spain?

Spanish people can help to end bullfighting in their country by writing to their local politicians and high level officials within the government, expressing their wish for national subsidies to the bullfighting industry to end, and for there to be a national legislative ban on bullfighting in Spain. They can also avoid attending bullfights and spreading the word to their friends and family.

They can also sign our petition to achieve a ban in Catalonia.

Another way to help is to support their local animal welfare organizations, either through donations or by attending peaceful events that call on the government to end bullfighting.

What can the rest of the world do to help? 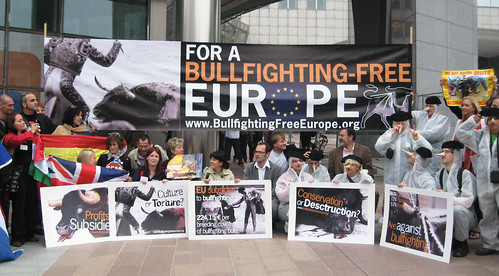 The number one thing that people can do to help end bullfighting is not to visit bullfights when they go abroad. Tourist money is a huge factor in keeping the industry alive. Whilst curiosity can often lead people to ‘just go once’, this is enough to sustain the industry and the animal cruelty that it promotes.

Is there anything else you’d like to say to our readers?

The WSPA is also campaigning for a Universal Declaration on Animal Welfare (UDAW) at the United Nations – international recognition that animals matter and governments should be doing more to protect them. Such an agreement would help us talk to governments about issues like bullfighting. You can sign the petition in support at Animals Matter.

Thank you very much for taking the time to answer my questions on this important subject.

I would like to end this interview by quoting some wise words from Mahatma Ghandi: “The greatness of a nation and its moral progress can be judged by the way its animals are treated.”