Rhino Home Video will be releasing the treat to end all treats for fans of The Who: Tommy and Quadrophenia together.

The Who: Tommy & Quadrophenia Live To Be Released Nov. 8th

Richard Marcus October 26, 2005 Comments Off on The Who: Tommy & Quadrophenia Live To Be Released Nov. 8th 97 Views

On November 8th 2005 Rhino Home Video will be releasing the treat to end all treats for fans of the rock band The Who. For the first time ever both of their seminal rock operas Tommy and Quadrophenia will be available in one package. The Who: Tommy And Quadrophenia Live With Special Guests is a three-disc, box set DVD culled from live concerts given by the Who. 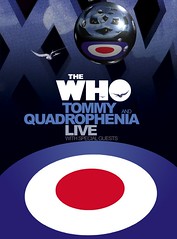 The first disc of the set is a live recording of Tommy that was done in 1989 at the Universal Amphitheatre in Las Angeles. Helping to make this performance all the more special is the fact that some friends of theirs dropped by to help out with gig. Elton John, Phil Collins, Billy Idol, Patti LaBelle, and Steve Winwood all contribute their talents to making this performance even more memorable.

No matter how enticing the first disc sounds, it’s the second disc that intrigues me the most. Not only is it a live performance of Quadrophenia, my absolutely favourite Who album, it’s the fact that they have staged it as a performance, not just a concert. Taken from their 1996/97 American tour it features live action performances from actors, with Alex Langdon in the role of the central character Jimmy.

Now as if those two discs weren’t enough to have Who fans salivating the third disc contains more concert footage from the same two North American tours as featured above and includes some of their biggest and best loved songs. On top of that there are also the extras and special features.

I’ve never been big on the commentary feature that’s usually included in films. I can’t really see the point of watching a movie and listening to folks yak over the dialogue; but on The Who: Tommy and Quadrophenia Live the viewer is able to turn the commentary on and off at will. So if there is something you’d like to hear either Roger Daltrey or Pete Townshend explain you can simply turn it on, and when they’re done that bit shut it off again, without having to start and stop the film. 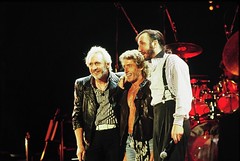 There also promises to be reams of photographs and other souvenirs of the tour, a documentary on the making of Quadrophenia, which includes old footage of the boys on stage in a London club in 1964 and footage from the movie Quadrophenia Capping off the festivities is an interview with Billy Idol, which I hope talks about his role in the performance of Tommy

Rhino Home Video has put together their usual package of tasty treats for those who can’t wait until November 8th 2005 to start sampling the wares. This includes video streams of “Behind Blue Eyes” and “Sea and Sand” in three resolutions of Windows Media, one Quicktime, and a RealPlayer stream for each song. As a final little treat they have created an E-Card for your enjoyment. Just follow the link that works best for you to check out either one of the two songs, and remember you’ll be able to pick up your copy in any retail store as of November 8th or online through Rhino’s web site.