Ordinary people following their conscience and doing extraordinary things is the ultimate in bravery.

The White Rose Society: Bravery Of A Different Sort

“Bravery” is a funny word. You hear it bandied about by politicians when they refer to soldiers en masse, as in “our brave troops.” People are cited for bravery for individual acts or deeds that are considered selfless to the point of putting yourself in harm’s way, and we use it to signify someone’s fight to overcome personal hardship.

It’s obvious that bravery and courage come in all shapes and sizes, and those who perform the deeds we so admire are as diverse a group as the term itself. Usually our admiration is reserved for individuals and their actions in the face of adversity.

How do we measure bravery? How can we discern what is truly brave from the hyperbole that we are fed on a constant basis. To say “our brave troops” means absolutely nothing because you could be as easily referring to some staff officer who will never see action as a Marine or Infantryman in the front lines outside Kabul or Baghdad.

Too often, when bravery is mentioned in terms of soldiering, it’s rare for it to be used in reference to the actions of one individual. It’s usually just melodramatic manipulation of sentiment by politicians and or pundits who are trying to generate an emotional response to a circumstance instead of having to rationalize a position. To speak against dissent by saying it undermines our brave troops is not saying anything of substance, and thus diminishes the value of the word bravery.

I have devised a means that I find works for me in measuring the bravery of a person’s actions. It usually comes down to asking myself the question, “Could I have done that?” Whether I ask it of myself consciously or it just pops into my head in the form of, “Holy Shit! How did they do that?” it amounts to the same thing.

Although all types of bravery are deserving of praise and recognition, there is one form that has always meant more to me than others. Those who, at great risk to their own life, are willing to speak their minds about circumstances and situations when everyone else is remaining silent. It’s one thing to voice dissent in our society where, to a certain extent, it is allowed, but it is another thing altogether to do the same thing under less liberal circumstances.

It would be safe to say that Germany in 1943 was not what one would call a free and open society, where political and social dissent were encouraged. But it was from 1942 until February of 1943 that a group of young Germans published, printed, and distributed leaflets that condemned not only the actions of the ruling Nazis, but the people of Germany for not objecting.

The White Rose Society was composed of five students and one professor at the Munich University in Germany between June 1942 and February 1943, the time of their arrest and execution. A sister and brother, named Sophie and Hans Scholl, headed the group and were joined by three ex-soldiers turned students, Christopher Probst, Alexander Schmorell, Willi Graff, and professor Kurt Huber. 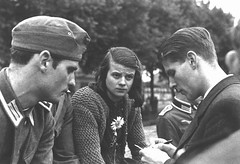 Sophie and Hans Scholl were just normal citizens of their country. In fact, like their fellows, they had been members of the Hitler Youth as children and had been given good citizen citations. It wasn’t until they became aware of the Nazi policies regarding the euthanasia of the physically and mentally challenged that they began to speak out against the regime.

It was their Bishop’s (Bishop Galen) sermon on the topic that was the content of the first of the six pamphlets they handed out. The common theme of the leaflets was the evil nature of the regime and a call to arms for the people to oppose the activities of the ruling Nazis

It is not too late, however, to do away with this most reprehensible of all miscarriages of government, so as to avoid being burdened with even greater guilt. Now, when in recent years our eyes have been opened, when we know exactly who our adversary is, it is high time to root out this brown horde. Up until the outbreak of the war the larger part of the German people were blinded; the Nazis did not show themselves in their true aspect. But now, now that we have recognized them for what they are, it must be the sole and first duty, the holiest duty of every German to destroy these beasts. White Rose Society Second Pamphlet

One thing that becomes painfully clear from reading these pamphlets is that, although it was forbidden to speak of these things, everybody was aware of the extermination policies regarding Jewish people. In one pamphlet they refer to the deaths of 300,000 Jews since the invasion of Poland. The six members of the group proclaim that if, as a country, they don’t want to be remembered as the embodiment of evil, they have to challenge this behaviour.

They did their best to remain secret, mailing the pamphlets to other cities for distribution and leaving the leaflets in deserted hallways of the university for students to find during breaks between classes. One day, when they discovered they had some left over in their case, they just dumped them out over an atrium from the top of a staircase. They were spotted and turned in.

They must have known when they started that this would have been their fate. How could they not have considered the knowledge they already possessed about the country? Yet they believed so much in the ideals they were expressing and loved their county so much, they were willing to take that risk. To me that is the ultimate in bravery; ordinary people following their conscience and doing extraordinary things, even though they know full well it could result in their death.

Soldiers, fire fighters, and police officers can be called upon to perform acts of bravery in the course of their duties, but ordinary citizens are not expected to run into the burning building to rescue someone. Occasionally you will read of a person reacting to a situation impulsively and doing so. While there is a quality of heroism involved in that act, it differs from the activities of the members of the White Rose Society in that they made a conscious, premeditated decision to act, and continued to do so until their inevitable death. To me that takes a type of courage beyond any other. One that forces me to ask myself, “Could I have done that?”