Oh, those crazy folks in Hollywood. They have such new-fangled ideas about the world.

They like their money, their lifestyles, sometimes going green, liberal guilt, and apparently they do this thing called "starter wives," too. I gather that it's kind of like a "starter home," you know, you buy one when you're young and figure you'll just trade up at a later date when you have more money and therefore appear more attractive to nicer houses. Once you have money those mansions don't care if you're short and bald with a pot belly, they just care about the size of your wallet. So, if your wallet's fat enough, you can dump that ramshackle starter house and get yourself a real house, one that's had tons of plastic surgery and Botox and lipo.

If my starter house… er, wife… looked like Debra Messing I don't think I'd try and trade up, but the basic conceit of the "was a miniseries and is now a real-series" The Starter Wife is that a movie mogul has done just that (no, Debra Messing isn't playing herself, she just stars in it). It premieres on USA Network October 10 at 9pm with a special two-hour episode before settling down to the usual one-hour deal. Or, as the blurb I have in front of me says:

The Emmy Award-winning hit original, The Starter Wife, starring Debra Messing returns this Fall focusing on the post-divorce adventures of Molly Kagan (Messing) as she begins a new chapter in her life. On the heels of its stellar ratings and awards success, USA has brought back the hit miniseries of 2007 as a series with ten exciting episodes, with Emmy Award-winner Messing returning to star and now serving as executive producer. Reprising their roles are three-time Emmy Award-winner Judy Davis (Life with Judy Garland: Me and My Shadow) as Joan McAllister and Chris Diamantopoulos (Behind the Camera: Mork & Mindy) as Rodney Evans – Molly's two best friends. Also returning this season as a special guest star is Joe Mantegna (Criminal Minds) as Lou Manahan, former studio head and former boyfriend of Molly. This season, the series is being filmed entirely in Los Angeles. Visit the official website and join other fans on the official Starter Wife Fan Page on Facebook.

Oh! I almost forgot, you know what else Hollywood-types like? Swag. They like swag. You know, free goodies valued at ridiculous sums of money. And, what better way to promote the new "was a miniseries and is now a real series" than to give away an awesome The Starter Wife tote bag filled with, I'm told, upwards of $1,000 worth of goodies?

One lucky winner is going to get one "sleek and sexy pewter metallic tote with The Starter Wife Logo debossed on the inside label," and inside the tote will be: six (6) makeup brushes with branded case, a three (3) piece Revlon makeup set, branded paddle hairbrush, a Sujean Rim signature Starter Wife t-shirt, a Starter Wife poster, a signature branded scarf, custom Sujean Rim shoe bags (set of 2), an LA Zagat Guide, a journal, a custom Lauren Merkin "Molly" clutch inspired by The Starter Wife, The Starter Wife Limited Series 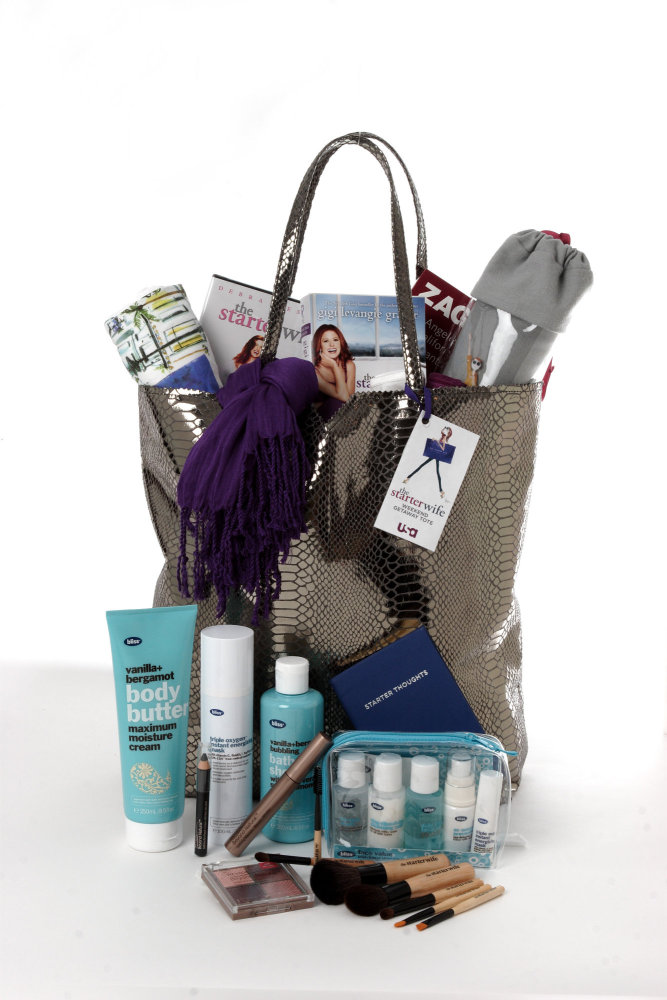 The rules are pretty simple (but FYI, you'll find some more on the entry form itself):