It's always interesting to see how the mainstream media handles those UFO stories that they just don't quite know what to do with.

The Media, UFOs in Texas, And… Bigfoot On Mars?

I always find it fascinating when the mainstream media gets hold of one of those stories that they just don't quite know what to do with.

You know the ones I'm talking about, right? One of those events comes along where science fiction seems to cross paths with reality, and all of a sudden you've got a real life Twilight Zone situation on your hands.

Sometime back in the 1990s, these type of stories briefly exploded into our national collective consciousness all at once, and with such force, that UFOs and aliens seemed to be everywhere. It seemed you couldn't pick up a magazine or turn on the television without seeing one of those little gray alien images, or hearing the various buzzwords of UFOlogy like "Roswell," "Area 51," or "The Face On Mars."

Thanks to the millennium fever which gripped much of the world at the time, as well as television shows like The X-Files, "the truth" as they say, was definitely out there, even if only for a little while. Still, as quick as the idea of UFOs as a cultural phenomenon came, it just as quickly went away – but not before it had been permanently etched into our collective consciousness. In other words, a lasting impact had been made.

So, perhaps as a result of that UFOmania of the nineties, when these sorts of stories come along — as they do every now and then — they have a unique way of capturing our imaginations. As I said, it is also always interesting to see how the media plays them. About this time last year, we saw one such story about a series of UFO sightings in Chicago, seen by numerous witnesses in broad daylight at Chicago's airport.

The media dutifully reported the story, even if they did so a few weeks after the fact. The television commentators also accompanied their coverage with the usual combination of nudges and winks. The story came, the story went. Yet, at least as far as I know, the Chicago sightings themselves were never adequately explained away.

This month, we have not one, but two such stories that would seem to be ripped straight from the pages of Fate Magazine.

So remember the face on Mars? 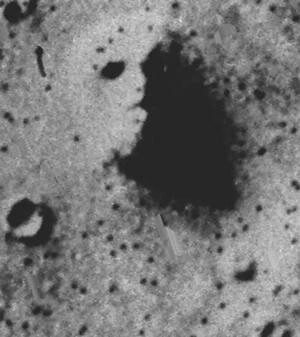 Back in the nineties, there was considerable talk among both UFOlogists, various pseudo-scientists, and even a few legitimate researchers about a NASA image that appeared to show a giant stone face carved out on the surface of Mars. Some even compared it to the Sphinx. NASA originally attributed the mysterious face to a trick of light and shadow. Later, they released new images from a later expedition that showed what appeared to be something less strange. To me, it looked like a more eroded version of the same thing, and made me wonder if they actually have wind or dust storms up there. Anyway…

This week, a story broke in the news media about a new image on Mars that potentially could prove even more intriguing. In 2004, NASA's Mars explorer vehicle Spirit captured what appears to be an actual, more or less human-looking life form on Mars. Only this time, they may have unwittingly given the news media some fresh comedic material for their reporting.

I mean, you tell me. How can a story even this potentially explosive be taken seriously when the "Mars Woman" in the photo looks so suspiciously like … Bigfoot? 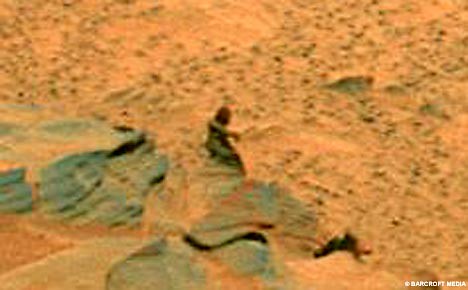 Seriously. Compare the picture above, with the now-famous Patterson photo of a purported lady Bigfoot you see below. If the two of these don't qualify for an entry in the latest edition of Seperated At Birth, then I honestly don't know what would. 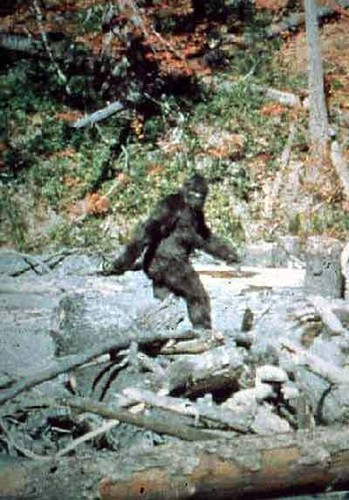 Which is too bad. Because despite the image's resemblance to something straight out of Harry And The Hendersons, the fact remains that it shouldn't be there at all. Not in a photo taken of the red landscape on a big, red, and supposedly dead planet anyway. My best guess is that by the time you read this, the media will have long relegated this one to a punchline about abominable snowmen, and dropped the story altogether.

Which is actually too bad, because I for one would like to know just what that thing is. Even if it is Bigfoot, how the hell did it get from the backwoods of Oregon to the surface of Mars?

Far more interesting however, are the strange things in the sky being reported in the tiny town (population 15,000) of Stephenville, Texas.

Multiple witnesses in the small town — including a pilot — have reported seeing a large, silent craft in the night skies with flashing or strobing lights. It was described by one witness as being "a mile and a half long." Some witnesses also reported seeing the object chased by military jets. Here is a typical example of how the media has played the story:

So yeah, we get it. Even without the giggles, if the military says that it's all much ado about nothing then so it must be. So move along folks, nothing to see here, right?

But here is where the story starts to get a little more interesting. You see, the military has changed its own story here. Which of course isn't anything new when it comes to the military and UFO reports.

In the most famous UFO story of all — the so-called Roswell incident — the official explanation for what really crashed there in 1947 has changed several times over the years, with each new version of the story further stretching credibility. In the most recent revision, the "UFO" is said to have been a top secret information gathering balloon, and the "bodies" to be crash test dummies. The only problem with that story is that said "dummies" weren't even being used until a decade later.

In the original version of the Stephenville events, officials were adamant that whatever people were sighting in the night skies wasn't anything of ours. Now, in just the past few days, that story has been changed. As in, "Oops, we forgot to tell you that we actually were flying something up there that night."

Not that the media will be following up on this. After all, there are still more important stories out there to be covered. Can you say Britney Spears? But you have to wonder why the military suddenly changed their story here. If there is anything more to this than meets the eye, you also have to think that they didn't exactly do themselves any favors by drawing new attention to it, just when the media had accepted the original version and moved on.

Kinda makes you go "Hmmm…" doesn't it? Maybe one of those damn things really does have to land on the White House lawn for the media to take it seriously.

Especially, if they find Bigfoot inside.

If and when that happens, we'll keep you posted.