If there is a reason for our armies to be in Afghanistan, let it be to give that face something to smile about again.

The Face Of Afghanistan

Richard Marcus March 1, 2006 Comments Off on The Face Of Afghanistan 70 Views

In this world of ours where it’s so easy to forget things when they are no longer front-page news, it’s useful to be able to stumble across pictures or other memory stimulants that remind us of events that have been ongoing for years. Everyday the headlines scream out news about events in Iraq, but before Iraq was Afghanistan, and it too is still the scene of ongoing attacks and death.

I know this is an exaggeration, but at times, it feels like Afghanistan has been forgotten about. You very rarely hear or see about it on the news; press conferences are dominated by information sessions about Iraq; and all people care about is when do the troops come home from the Middle East, perhaps forgetting how many thousands of troops, including American and Canadian, are still stationed in Afghanistan.

Perhaps we in Canada are more sensitive to that situation because we have troops there, and our role is increasing in responsibility. On Tuesday, a Canadian, Brigadier-General David Fraser took command of the International force in Southern Afghanistan that is replacing an American security force that had been patrolling the area.

During the acrimony over Canada’s refusal to participate in the Iraq coalition, it was conveniently forgotten by many critics that Canada had been one of the first to agree to participate in Afghanistan. Canada does not have a standing army of any real size, so at the time of the Iraq invasion, we couldn’t have contributed in any significant manner anyway without having to drastically reduce our commitments in other arenas.

Although recent polls are showing that more Canadians are against our involvement than in favour, there was initial support for our involvement. Americans can understand that as casualties have mounted, more people have started to question why we are still there.

The answer to that is unfortunately painfully obvious. Afghanistan is no more stable now than it was four years ago when the invasion took place. The Taliban and their allies are highly experienced guerrilla fighters and know how to use the mountainous terrain of their homeland to full advantage.

They were never defeated. As far as they were concerned, the war has just moved into a phase that is familiar to them from when they fought the Russians back in the 1980’s. Like the Viet Cong in Viet Nam, they just fade back into the villages and towns of the hill countries when they are not fighting and are next to impossible to monitor.

Even after the liberation of Kabul, the capital city, the fighting has never really stopped. There have been lulls in the conflict where attempts at rebuilding and solidifying the government are made, but this is a country that has very little history of central governance.

Power has always rested in the hands of local warlords and tribal groups. Foreign powers from the British Empire to the Soviet Union, and now the current international force, have found it to be a task of immense proportions to attempt the implementation of any long-term central authority.

Unlike Iraq where there are the oil fields that fuel an economy, Afghanistan is still primarily an agrarian society once one leaves the cities. Conditions have always been difficult for people who try and survive through farming in the formidable terrain of the countries rural districts and outlying provinces.

Since the Soviet invasion of 1979, Afghanistan has known little peace. Far too many times the press will use the expression “war torn,” and it’s meaning has become diluted. But if there were a country that qualifies for that assessment, it would be this one. Everything from families to the means to eke out an existence have been torn apart.

People’s lives have been destroyed beyond repair, their futures shattered and their hope destroyed. The human spirit may be hard to destroy, but it certainly can be damaged almost beyond repair. 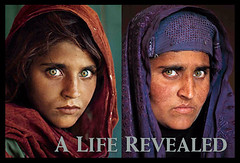 The picture on the left above has to be one of the most famous to come out of the Afghan War. Steve McCurry took this photo of Sharbat Gula in 1985 for National Geographic Magazine when she was perhaps twelve, or thirteen. Seventeen years later, he was able to find her again to take the picture on the right.

For so many of us, her picture in 1985 became a symbol representing all the misplaced children in the world. Hauntingly beautiful, her wide eyes stare at us in a silent challenge that we can’t ignore. Looking at her, we ask ourselves how can we have let this happened.

It wasn’t until Steve tracked Sharbut down seventeen years later that he learned her story of how she ended up in that refugee camp in Pakistan. In 2002, when he met up with her again, she might have been thirty. She’s not sure because both of her parents were killed in a bombing raid when she was around six during the Soviet invasion and the knowledge of her birth date died with them.

The child on the left has grown into the woman on the right. The face has changed, but the eyes are still haunting and tell us all we need to know about life in Afghanistan for the people who have been caught up in the wars that have been continuous for the past twenty-one years.

I’d like to think that the Canadian army is in Afghanistan so that her children will be able to get the education Sharbat dreams of them getting. In the nineties, she was able to return to her home village where she was married at age sixteen. (The only day in her life she can recall being happy was her wedding day.) They have no running water, no school, roads, or medical clinics. They grow basic crops on some terraced fields and there is a stream that runs down the mountainside for fresh water.

The debt that is owed the people of her generation cannot be repaid except by providing a future for her children and ensuring that at least she can stay in her village for the rest of her life. This is the task that faces General Fraser and the troops under his command.

If there is a reason for our armies to be in Afghanistan, don’t let it be for something as nebulous as the war on terror, or making the world safe for democracy. Let it be to give that face something to smile about again. Then, I think, they will have truly accomplished something magnificent.