Though I never met him, the death of former major league pitcher Steve Howe last week hit me hard and low.

The Death of Steve Howe

Though I never met him, the death of former major league pitcher Steve Howe, 48, in an early morning, single vehicle, freeway accident in Southern California last week hit me hard and low. I always thought of Howe — whose career as a left-handed closer began so promisingly as Rookie of the Year for the Dodgers in 1980 before stuttering then stalling out after SEVEN suspensions for drugs and alcohol — as sort of my vastly more talented doppelganger. 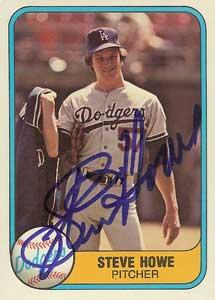 Howe was just a few months older than I; we were of similar size, and we were both left-handed pitchers. Though my career peaked in high school, Howe was the Dodgers’ closer by the time he was 22. I always rooted for him to get his career, then his life, back together long after he became much better known as a bad joke and an embarrassment than as a sensational pitcher. I never gave up on the guy – perhaps because it would have felt like giving up on myself.

I too had my problems with substance abuse all through my late-teens and twenties. I can’t believe I never hurt myself or anyone else given the HUNDREDS of times I drove under the influence of alcohol over a period of about 15 years. The extent of my fortune and the severity of the consequences should my force field of luck falter, finally hit home on a late summer night in 1989.

For several years I had been telling myself that I was a better DJ when I drank – I relaxed, got into it more. I also got sloppy, ruined equipment and records, flirted with women I had no interest in, and said stupid things. But I could ignore that.

That night, my friend, the manager of a long-gone dance club carved out of the Sea Lion restaurant in Malibu, was going away to law school and I had just become separated from my first wife. So, for very different reasons, we raised many a glass together throughout the evening as I had entertained a gathering of tourists and locals while waves scenically danced against the breakwater and splashed upon the club’s large picture windows.

With the drinking finally finished and the club closed, I brushed my teeth and scooped up a finger-full of peanut butter out of the jar I kept in the truck to mask the odor of alcohol. I chuckled at my own cleverness.

I wound my way south through the misty twists and turns of Pacific Coast Highway at 3:00 AM as it snaked down toward Sunset with my brain buried under the sweet, humming insulation of too much alcohol.

Grinning vacantly, I took another hairpin turn at a reasonable but exhilarating speed and spied traffic cones ahead forcing me toward the center of the road. Oh bother.

I came to a near-stop behind several other cars just before the Sunset intersection. The cones ambiguously either wanted us to turn left onto Sunset or to continue south in the far left lane. Some cars turned onto Sunset, some went on ahead. I chose the second option.

Around another bend, frantic activity and grim faces in uniforms confirmed that we had made a mistake. At least I wasn’t alone in my error. The night was lit hallucinogenically with ambulances and police cars flashing and clashing their garish, assaultive lights.

A few cars ahead, a figure waved emphatically for the line of cars to turn around. As I slowly backed to turn around, a blinding light shone in through my driver’s window and a gruff knock followed. Startled, I stopped and rolled down my window.

“What the hell are you doing? Can’t you follow directions? Don’t back that way, you fool.” An unexpected note of panic, or fear cut through the officer’s voice.

I mumbled apologies and things about following other cars and this and that. The cop smiled and held his hand up for me to be silent.

“Have you been drinking peanut butter cocktails all night? I think you’ll be spending the evening with us, buddy.” The cop sounded strangely calm and almost kind. “Straighten this thing out and get out of the car.”

I turned the truck so that it again faced south, my original direction. My headlights shone on the ambulance in front of me and on a long white, billowing object on the ground between my truck and the ambulance. A sudden wet gust up from the breakers blew the white covering off of the object, over the ambulance, and fluttering into the darkness.

Immediately before me was a red, blue and white object that, in a sickening jolt, I realized was a dead, male body. It — he — was impossibly broken and naked except for socks and shoes. Mortified, I turned away. The officer and I stared at each other in silence.

The officer told me that the body was an 18 year-old kid who had been playing a perverse form of chicken with a buddy by mooning passing cars from the ocean side of the road. The competition had led each incrementally into the road itself.

A Porsche had come around the blind bend at 85 mph and turned the kid into puree. The driver and the mooners had been drinking – just like I had. In that moment of horror, a calm certainty came over me that I had to stop drinking. I felt very lucky, very ill, and very guilty at the same time sitting there in police custody.

I don’t take any particular credit for this decision – it didn’t even feel like my decision to make. It felt like unavoidable received wisdom. Not that there aren’t people who make the other choice, or who refuse to choose, which is the same thing. I stopped completely for about eight years, and have found over the last several years that I can drink lightly, not want more, and be okay; but I needed all of that time off for my body, brain and soul to recalibrate themselves into something resembling “normal.”

“For unknown reasons,” A California Highway Patrol statement said, Howe’s pickup truck — traveling westbound at about 70 mph at 5:30 a.m., April 28 on Interstate 10 near Cactus City — left the roadway, entered the median and rolled numerous times before coming to rest on its roof. Howe was not wearing his seat belt and was partly ejected from the truck. He was pronounced dead at the scene. Results from toxicology tests have not yet been released.

Dodger broadcaster Rick Monday, a former teammate of Howe’s, told the LA Times, “He seemed to constantly struggle to figure out how to get his life in order. But no matter how bad things were, Steve always found a ray of sunshine.”

A summer without baseball is like Christmas without Santa Claus, and we all need a little “Ho-ho-ho!” right now