The Choice of a New Generation

Eric Olsen January 23, 2004 Comments Off on The Choice of a New Generation 24 Views 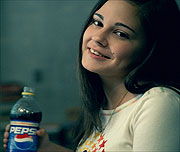 It has become a truism and a cliche that the Super Bowl is worth watching for the ads alone. Maybe, the game itself is often over by halftime.

When I was DJing full time, I used to work a Super Bowl party one place or another each year and that was a good way to handle it: loud music on with the TV sound off, drinking games involving first downs, completions, any kind of score (but of course!), drunken mayhem, dancing girls. One year (later ’80s) Madonna came in to the Screaming Clam in Malibu and stayed long enough to let everyone know she had been there – I saw her walk past th DJ booth but didn’t talk to her. Damn, I’m in a chatty mood today.

Anyway, this commercial sounds hilarious, and I’m not as certain as Mr. Bainwol that it will be taken the way he thinks it will:

Some 20 teens sued by the Recording Industry Association of America, which accuses them of unauthorized downloads, will appear in a Pepsi-Cola (PEP) ad that kicks off a two-month offer of up to 100 million free – and legal – downloads from Apple’s iTunes, the leading online music seller. The sassy ad, to be seen by Super Bowl’s 88 million viewers on Feb 1, is a wink at the download hot button. Pepsi hopes the promotion will connect its flagship cola, as well as Sierra Mist and Diet Pepsi, with teens who’ve shown more affinity for bottled water, energy drinks and the Internet.

….Annie Leith, a 14-year-old from Staten Island, appears with other downloaders in the ad, which features music by Green Day. The band cut a special version of the 1966 Bobby Fuller Four hit I Fought the Law for the ad, by BBDO, New York. In the ad, Leith holds a Pepsi and proclaims: “We are still going to download music for free off the Internet.” Then the announcer says how: “Announcing the Pepsi iTunes Giveaway.”

RIAA is all in favor of the ad and the promotion.

“This ad shows how everything has changed,” says Mitch Bainwol, RIAA chairman. “Legal downloading is great because fans are supporting the future of creative work in America.”

No, I think what it shows is the normality of downloading music for free, Mitch, and reinforces that normality. But think what you want, bud.