The Beauty That Killed the Beast Dies

Eric Olsen August 11, 2004 Comments Off on The Beauty That Killed the Beast Dies 83 Views 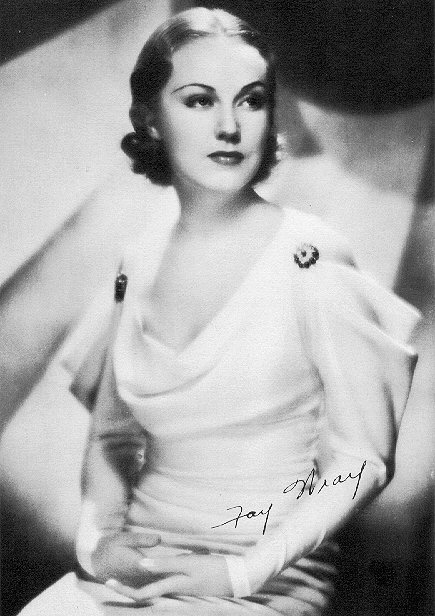 “I used to resent `King Kong,'” she said in a 1963 interview. “But now I don’t fight it anymore. I realize that it is a classic, and I am pleased to be associated with it.”

Wray died quietly in her sleep Sunday at her Manhattan apartment, said Rick McKay, a friend and director of the 2003 documentary “Broadway: The Golden Age,” the last film she appeared in. She was 96.

The Empire State Building — the skyscraper that Kong scaled while holding tight to Wray — will dim its lights for 15 minutes Tuesday in honor of the actress, a building spokesman said.

During a career that started in 1923, Wray appeared with such stars as Ronald Colman, Gary Cooper and Spencer Tracy, but she was destined to be linked with the rampaging Kong in movie fans’ minds.

Her other films included adventures like “The Four Feathers” and “Viva Villa;” Westerns such as “The Texan” and “The Conquering Horde;” romances such as “One Sunday Afternoon” and “The Unholy Garden;” as well as the horror films “Dr. X” and “The Mystery of the Wax Museum.”

After appearing in director Erich von Stroheim’s 1928 silent “The Wedding March,” playing a poor Viennese girl abandoned by her lover, Wray became a much-employed leading lady. In 1933, the year of “King Kong,” she appeared in 11 films.

….In “King Kong,” she plays an unemployed actress who agrees to take a job with a movie company that is going on location to a mysterious island inhabited by the huge ape.

When the fictional film company discovers him, Kong is attracted to Wray and abducts her. But he is eventually captured and put on display in New York. Kong escapes and finds Wray, with terrifying results, but eventually meets his death on the Empire State Building.

In her 1988 autobiography, “On the Other Hand,” Wray wrote of Kong: “He is a very real and individual entity. He has a personality, a character that has been compelling to many different people for many different reasons and viewpoints.”

The actress recalled that she was paid $10,000 for her work on “King Kong,” but her 10 weeks’ work was stretched over a 10-month period. “Residuals were not even considered, because there were no established unions to protect us,” she added.

Although Kong appeared huge, the full figure was really only 18 inches tall. Wray spent her time with its fake arm, which was 8 feet long.

“I would stand on the floor,” she recalled, “and they would bring this arm down and cinch it around my waist, then pull me up in the air. Every time I moved, one of the fingers would loosen, so it would look like I was trying to get away. Actually, I was trying not to slip through his hand.”

….Apparently at peace with her most famous role, Wray wrote in her autobiography: “Each time I arrive in New York and see the skyline and the exquisite beauty of the Empire State Building, my heart beats a little faster. I like that feeling. I really like it!” [AP]

More from the Toronto Star:

Born Vina Fay Wray in Cardston, Alberta., she had leading roles in about 75 other motion pictures between 1923 and 1958 — 11 alone in 1933. But none would so define her career as that classic tale about unrequited love between a virginal beauty and a giant ape.

With that role Wray became a prototype of the horror-film heroine, a character who decorated more than dominated a movie and was gamely willing to shriek in terror. Initially, she thought of Cary Grant or Gary Cooper when co-director Merian C. Cooper gave the actress a teasing description of her co-star as the “tallest, darkest leading man in Hollywood.”

….Charles Foster, a Canadian writer and film historian who befriended Wray when he worked in Los Angeles in the 1940s, said King Kong was a good thing for her career, even though it eclipsed just about everything else she did in film.

“If Fay Wray had not made King Kong, I wonder today if anyone would remember her name. She’s lasted all those years simply because of King Kong. She wasn’t a household name until that happened.”

She largely retired from film in 1942, after a succession of undistinguished dramas as well as problems at home with her first husband, writer John Monk Saunders, who she said was addicted to drugs.

Wray attempted a career in playwriting and did some stage acting. Those efforts, she said, led to romantic involvement with the playwright-screenwriter Clifford Odets. She said she also rejected the advances of Nobel Prize-winning author Sinclair Lewis, in whose play Angela is Twenty-Two she acted.

Stephen Hunter digs her hard in the Washington Post:

you can’t really call a Fay Wray scream just a scream. It was too rich, dense, urgent, primal — too complete. It wasn’t just noise, it was agony and fear and hopelessness, it carried with it the tragic conviction that civilization was an illusion, and it was driven forward largely by the possibility that Mr. Right would turn out to be a 40-foot-tall monkey. You’d scream too, though probably without as much eloquence, beauty or class. 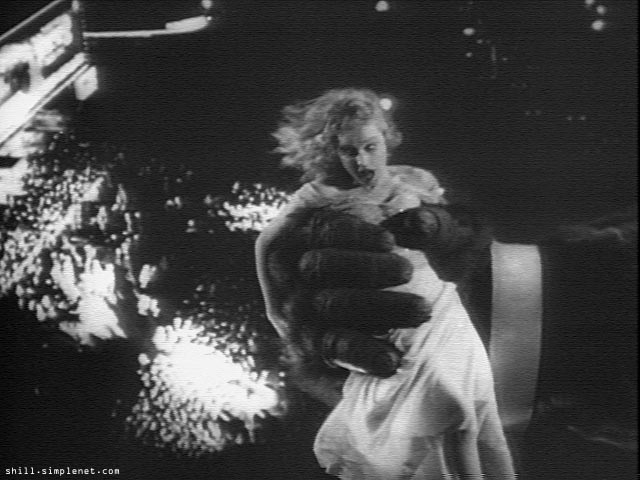 Fear makes most people ugly and stupid. That was one part of the magical Wray way: When she screamed, she was still beautiful. At full-decibel yelp, she managed somehow to conjure a whole universe of human frailty into the orchestration of a lovely face, irises widened to f/1, tender throat a-tremble, delicate little cluster of fingers rising fitfully to cupid lips. The eyes, the eyes, the eyes: huge, glistening, radiant with the approach of the hideous. Not even Edvard Munch, with his famous, eternal screamer on the bridge, quite got the whole sense of human horror that Wray delivered when she let fly one of her cloud splitters.

Check out the excellent Fay Wray Pages site for all kinds of information and hundreds of photos – wow!