Arriving in a style befitting his new station in life, Hicks, 29, rolled out of a cool stretch limo into the Alabama heat to join his old band, Little Memphis Blues Orchestra, Sunday afternoon for a southern-fried 20-minute soul show. Hicks and the band performed “Soul Thing,” “In Your Time,” and a cover of Billy Preston’s “Will It Go Round in Circles.”

Then, after chilling a bit, Hicks hit the festival stage again that night, jamming on harmonica with the legendary Allman Brothers on “One Way Out” near the end of their set. 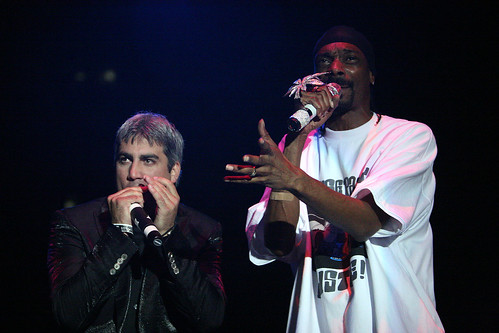 All of that sounds pretty normal, but how about this? Surely the incongrous highlight of the weekend was Hicks doing his spasmodic enthusiasm dance on stage with ice cool Snoop Dogg Saturday night. In addition to the frenetic motion, Hick featured some smokin’ harmonica riffs on the Snoop classic “Gin and Juice.”

Of Snoop, Hicks told the Birmingham News rather effusively, “I have the greatest respect for Snoop Dogg as an artist, but also as a family man, a businessman and an integral part of pop culture. Rap music has the most advanced lyricism there is. Rap is real; there’s nothing pretentious about it. I’m very excited about appearing with Snoop. I think it’s great.”

Hmm – good to know. Pretentiousness seems to matter quite a bit to the Gray Haired Guy. When named People Magazine’s bachelor of the year last week, Hicks said he is looking for a woman who can “let her hair down and can be who she is and is not pretentious about anything.”

Including rap music, no doubt.

Back to Snoop: I notice no mention of the Dogg’s airport lounge comportment in Taylor’s little speech about him. The lanky rapper was charged with “violent disorder and affray” and spent the night at a West London police station after a Heathrow melee in April. As many as 20 police with 10 dogs stormed on to the scene, which eventually included broken champagne and/or whiskey bottles, Snoop bellowing obscenities at any and all who would listen, and seven injured officers including one with a fractured hand.

The newly famous soul man also mused to the News about the other side of fame. “I really can’t get out much these days,” Hicks said. “This is the starting point for my getting back into reality, back into society, back in my hometown. I haven’t been around people much. People have seen me, but I haven’t seen them. I haven’t gotten out there and been able to really touch them.”

“I’m climbing an uphill battle,” he said, “shedding the Idol image and emerging as an artist. It’s been tough for me, not really having all of my assets with me for about eight months. As soon as the show was over, I was thrilled to be in artist mode, playing harmonica and guitar.”

Hicks’ debut single “Do I Make You Proud” was released on June 13th, and his debut album will be released later this year.