Two discoveries are reminders that Homo sapiens sapiens is just another member of the animal kingdom.

Two scientific discoveries are reminders that Homo sapiens sapiens is just another member of the animal kingdom.

Researchers have found that the gloriously named putty-nose monkey communicates in “sentences”, having a syntax that puts together two “words” to mean something entirely different to either of them:

The monkeys call out ”pyows” to warn against a loitering leopard and ”hacks” are used to warn about hovering eagles overhead. However, combining pyow and hack means something like ”let’s go”, according to scientists from the University of St Andrew’s.

This report, from the journal Nature, implies sophisticated linguistic processing in the monkeys’ brains – to ignore the very strong individual meanings of the calls and put together the new meaning. In addition, since these are not particularly high-level animals — it would perhaps have been less surprising were this to be found in chimpanzees or gorillas — it suggests this ability must be widely distributed in the animal kingdom. It is not that animals are too dumb to “talk, just that we’ve been insufficiently intelligent or switched-on to understand them. 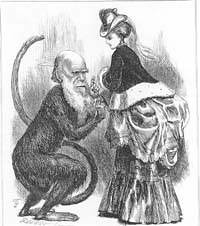 Speaking of chimps, it seems the mockers of Charles Darwin closer to the truth than they would have liked. For research also reported in Nature suggests that interbreeding between human and chimp ancestors went on for much longer than previously thought – indeed there was a split, then a hybridization between the two groups before the final split, much later than the previously estimated 7 million years.

All of that might be taken as a further push — which sadly seems to be needed — to care for all of our relatives, both close and more distant. That reflection comes from the news that India’s tiger population has probably halved in just four years. The wild populations may not last out the decade.