James Doohan's ashes are blasting off in October.

Star Trek’s Scotty to Join Others Stars in Space

Actor James Doohan, who played engineer Scotty on Star Trek’s Enterprise, died last July of Alzheimer’s disease and pneumonia at 85 and was scheduled to have had his ashes blasted into orbit last year, but the flight was delayed due to tests and tinkering — Scotty style — with the Space Services, Inc. rocket scheduled to bear the poignant load – no unfortunate incidents with famous ashes, please.

Everything is squared away now and a dehydrated Doohan will finally make the trip into space on October 21 from Spaceport America, a new launching facility near Las Cruces, N.M., along with the earthly remains of over 100 other travelers including Cooper.

The “Legacy Flight” service, according to the Space Services site, “affordably launches a symbolic portion of cremated remains to space, and after experiencing the zero gravity environment, returns the individual flight capsules and modules back to Earth,” where the individual capsules are recovered, validated as having reached space, and “returned to the family or loved one as a keepsake.” The capsule is then mounted on a plaque. 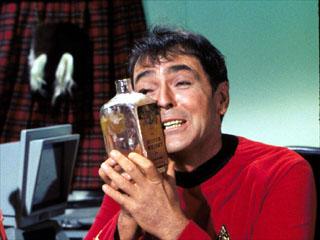 A public memorial service honoring Doohan, Cooper, and all of the participants of the Legacy Flight will be held on October 20th at a location near the launch site.

And since Doohan was such a space enthusiast, his ashy plaque, apparently, will also go up again in early ’07 on the “Explorers Flight,” going into orbit around the earth for several years before REALLY, no kidding, burning up upon reentry.

Fans can post tribute messages for Doohan, and these messages will be put on disc and included with the payload on the Explorers Flight.

Doohan’s widow, Wende, said the actor would have “given almost anything to be able to actually go into space” in a letter to fans posted on the Space Services website. “He finally gets his wish, I can’t think of a more fitting send-off than having some of his fans attend this, his final journey,” she wrote. 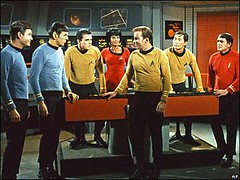 I loved Star Trek as a kid and watched it faithfully in the original run from ’66-’69 – it was exciting, fired my young imagination and seemed like a fully-realized creation, manned with real people doing real things in fantastic settings, and it was funny, too.

I remember listening raptly to a lecture by Gene Roddenberry when I was in college in the later ’70s, and was very excited when he announced that a Star Trek theatrical film was in the works.

I didn’t respond that well to the films – the jump to the big screen and the vastly improved production values seemed to diminish the charm of the concept rather than improve it for me; and of course, I was getting older.

But it gave my heart a powerful tug when Doohan — who was actually Canadian, by the way — too old and sick to attend to his convention duties anymore, was saluted one last time in August of 2004 with “Beam Me Up Scotty…One Last Time,” a three-day farewell at the Renaissance Hollywood Hotel to the man who, as fiery Montgomery Scott, ran the U.S.S. Enterprise’s engineering deck on Trek’s flagship series and six big-screen adventures. 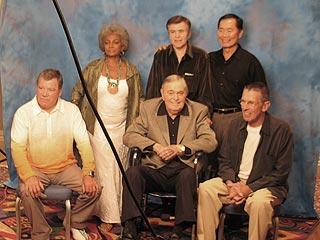 Only DeForest Kelley, Starfleet’s esteemed Dr. McCoy, who died in 1999, failed to attend of the original crew – at least visibly.

There comes a time when no amount of makeup, sleight of hand or wishful thinking can hide the sad reality that human beings age and die. Scotty shall beam no one up again, now it’s his turn.