Break out the air-guitar and dust off your video camera.

Star in Barenaked Ladies’ “Wind It Up” Video

Do you play a pretty mean air-guitar? Have you always wanted to star in a music video? Barenaked Ladies is now giving you the chance to be a part of their newest video, "Wind It Up." In a contest announced via their website and podcast, the band is urging their fans to record themselves playing air-guitar to the bridge of their newest single.

On Barenaked Ladies' Myspace profile page, fans can download the "video edit" version of the single. After digging out the video camera, recording thier best air-guitar performance, and uploading the video to Youtube, all that is left is filling out a short form on the BNL website. Entries must be made before September 1, 2006 and band members will be making the final decision as to which entries make the final video. 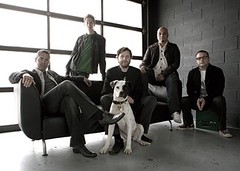 Don't see yourself as a star of the air-guitar? Well Barenaked Ladies don't want you to miss out on all the fun. At their website you can download the tracks to two singles, "Wind it Up" and "Bankjob." With software like Garageband or Acid the tracks can be mixed to the fans' liking and then they can upload their final remix back to website. Last month they offered 16 tracks to their first single, "Easy" and plan to offer two more yet to be announced songs. The five winning remixes will be featured on an EP and sold to benefit the band members' favorite charities.

"Easy," "Wind It Up," and "Bankjob" are from the forthcoming album Barenaked Ladies are Me which will be released September 12. "Easy" splashed on to the Adult Listener charts, breaking the top 20 in its second week of release. The new CD is the 11th release from the band, which hails from Toronto, Canada and is known for their satirical style and metaphorical lyrics. They've had numerous chart topping hits, including "One Week," "Pinch Me," and "Brian Wilson."