After sitting in a Dubai prison since May 19, Austin blows through toot trial on U.S. Independence Day.

In a whirlwind blow through the Dubai justice system on U.S. Independence Day, Grammy-grabbing R&B songwriter/producer Dallas Austin, 33, was convicted of possessing 1.26 grams of cocaine, sentenced to four years in prison, and pardoned by Dubai potentate Sheik Mohammed bin Rashid Al Maktoum – all on the same day.

The Atlanta-based Austin — who has written and/or produced earthy grooves for TLC (Ooooooohhh … On The TLC Tip, CrazySexyCool, Fanmail), Madonna (“Secret”), Gwen Stefani (“Cool”), Boyz II Men (Cooleyhighharmony), Michael Jackson (“This Time Around”), Janet Jackson (“Just a Litle While”), Pink (“Don’t Let Me Get Me”), Kelis (“Trick Me”), Sugarbabes (Taller In More Ways), Blu Cantrell (“Hit ‘Em Up Style”), Anastacia (“Left Outside Alone”); and who was executive producer of the 2002 film Drumline — was arrested at Dubai Airport for possession of cocaine on May 19 as he reportedly arrived to attend Naomi Campbell’s three-day birthday party marathon at the Burj Al Arab hotel.

Hey, if you are going to party for three days, a little toot is not an illogical condiment. But, apparently Austin was unaware of the United Arab Emirate’s (of which Dubai is a part) “zero-tolerance” drug policy, where possession of even a small amount of a banned substance typically leads to a four-year-plus prison sentence. 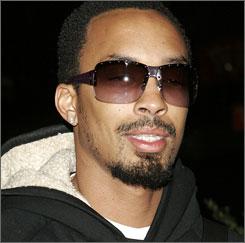 There was apparently much maneuvering behind the scenes as Austin cooled his heels in Al Rashidiya prison for the past seven weeks: UAE’s English-language 7DAYS paper reported yesterday, “American ‘VIPs’ have apparently been in touch with senior figures here to try to ensure lenient treatment for Austin.”

The paper claims the pardon was in place even prior to Austin’s trial, which began Sunday. This helps explain why the paper described Austin as “looking confident, at one point even appearing to wink at his lawyers,” as the charges were read against him.

When asked how he would plea, Austin said, “I’m guilty, but it was a mistake. I didn’t realize I had the drugs with me and I didn’t intend to use them here in the UAE.”

“He didn’t know that he was breaking the law here,” his local lawyer, Mohammad Al-Reda said. He added that it should also be taken into consideration that Austin is a “celebrity,” and has “done a lot of good things in America, he is a famous guy, and I’m pleading for mercy for the accused, especially as the crime’s motivation wasn’t wicked.”

I have very conflicted feeling about all this. On the one hand, I don’t much want to see Dallas Austin (or anyone else) go to prison for four years for carrying a gram of cocaine in his luggage. On the other hand, such obvious special treatment because the guy is a “celebrity” and has some large coin behind him makes a fair mockery of the notion of “rule by law.”

By way of example, in May a judge sentenced a British man to five years in jail for possessing 2.7 grams of cocaine, and last week a 31-year-old Saudi was sentenced to four years for 1.8 grams; but no one much cares about them.