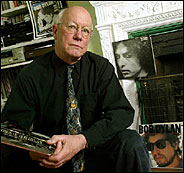 Like Christopher Ricks, newly elected professor of poetry at Oxford, and the Warren Professor of Humanities at Boston University, who has a new book out on the subject that many might consider … granular:

In a corner by the desk there is also a boom box. Mr. Ricks brings this to lectures when he wants to talk about another of his favorite poets: Bob Dylan.

Mr. Ricks, who is 70 and was born in Britain and educated at Oxford, is a professor’s professor, a don’s don. He is courtly, charming and fond of wicked anecdotes about academic backbiting. He is also immensely learned. It’s a tossup whether he or Harold Bloom knows more English verse by heart, but Mr. Ricks surely knows more Led Zeppelin lyrics than Mr. Bloom does, and can recite them on request. His love of Mr. Dylan’s work is not an affectation, though – the pathetic impersonation of an old prof trying to prove how cool he is – but a genuine passion. He has just added to the not inconsiderable body of Dylan scholarship with a book of his own, his longest to date, “Dylan’s Visions of Sin” (Ecco Press), which devotes some 500 pages to a close analysis, line by line sometimes, of the master’s greatest hits.

The book begins with an address to the reader that is a little riff on one of Mr. Dylan’s best-known early songs: “All I really want to do is — what, exactly? Be friends with you? Assuredly, I don’t want to do you in, or select you or dissect you or inspect you or reject you.” And it continues in much the same vein. Mr. Ricks’s writing style is not unlike his conversational style: witty, allusive, punning (in the book, for example, he talks about a “crèche course” and “bed-rheumy eyes”), digressive and free-ranging, darting off to make connections that are sometimes baffling but more often surprising and provocative. At various points he compares Mr. Dylan to Marvell, Marlowe, Keats, Tennyson, Hardy, Yeats and Marlon Brando, to cite just a few of his references.

One of Mr. Ricks’s critics, the Oxford don John Carey, has complained that there is something slightly “trainspotter-ish” – or obsessively detailed – about “Dylan’s Visions of Sin,” and he points out that Mr. Ricks is so ingenious he “could prove the telephone book was beautifully intricate if he tried.” The book pays no attention at all to Mr. Dylan’s life – no mention here of his famous shift from acoustic to electric guitar, of his conversions from Judaism to Christianity and back again, or of his recent appearance in a Victoria’s Secret commercial – and is more interested in the form of the songs than their content.

Certain passages of “Dylan’s Visions of Sin” may strike some readers as over the top, as when Mr. Ricks devotes four pages (and four footnotes) to the lyrics of “All the Tired Horses,” a song that is only two lines long – or maybe three, if you count the long “Hmmmm” at the end.

Other chapters, though, draw insightful and persuasive parallels between, say, “Lay Lady Lay” and John Donne’s poem “To His Mistress Going to Bed,” between “Not Dark Yet” and Keats’s “Ode to a Nightingale,” and between “A Hard Rain’s A-Gonna Fall” and the Scottish ballad “Lord Randal.” And throughout the book Mr. Ricks is particularly perceptive about the way Mr. Dylan, whom he calls “one of the great rhymesters of all time,” punctuates his songs with brilliant and surprising line endings. (Mr. Ricks’s favorite is the rhyme in “Sign on the Window” that pairs the line “Build me a cabin in Utah” with “Have a bunch of kids who call me `Pa.’ “)

….He began listening one evening at Smith College in 1968 when after dinner his host turned out the lights and put on “Desolation Row”— a song bound to catch an English teacher’s attention since it has the lines (or used to, until Mr. Dylan stopped including them) about “Ezra Pound and T. S. Eliot/Fighting in the captain’s tower/While calypso singers laugh at them.” “Well, the depth of that,” Mr. Ricks said. “I thought those were wonderful. I thought those were great lines.”

Around the same time Mr. Ricks also began listening to Mr. Dylan’s love songs. “You love a song at first by applying a person you knew to that song,” he said. “And then it very beautifully turns into the other, complimentary thing, which is that you understand the person better by virtue of the song, and it’s a lovely sort of virtuous circle that this is. The extraordinary applicability of the songs does seem to me to be part of their greatness. I do in the book somehow say, `How did Dylan know this about me?’ ”

….Not everyone of his acquaintance shares Mr. Ricks’s Dylan enthusiasm. “My eldest child is 45,” he said, “and I think he faintly pities me about this.” An expedition with some of his younger children to see the Dylan movie “Masked and Anonymous” was, he admits, “not successful.” John Silber, the former chancellor of Boston University and a friend of Mr. Ricks, used to pretend that the Dylan who so captivated Mr. Ricks, was Dylan Thomas, not the former Bob Zimmerman. And even Mr. Ricks’s wife, the photographer Judith Aronson, didn’t go to all three concerts when Mr. Dylan was performing in the Boston area recently. But it never occurred to Mr. Ricks to skip one. Dylan concerts have a particular beauty and also a certain sadness, he explained, because Mr. Dylan himself is the one person who has to be at a Dylan concert and also the one person who can’t go to a Dylan concert. “It’s sad,” he said, “the way it’s sad that Jane Austen couldn’t read a Jane Austen novel.” [NY Times]

The obvious test of Dylan’s greatness as a songwriter is the great success that others have had with his songs: the Byrds, Manfred Mann, the Band – a very obscure personal favorite is a harrowing version of “One More Cup of Coffee” by a ’70s English rock band called Nutz.

Speaking of Dylan nuts, a very sincere and amiable one is Clinton Heylin, who has written not only the fascinating, penetrating, encyclopedic unauthorized biography, Bob Dylan: Behind the Shades Revisited, which was updated just last year, but the truly obsessive Bob Dylan : The Recording Sessions, 1960-1994, which includes information on songs, personnel, studios, dates, bootleg cuts, and the recording process of every song he ever recorded between ’60 and ’94. If you are a recording history buff, it’s easy to fall into this one and never find your way out again.

In April Michael J. Gilmour came out with an intense look at Dylan’s use of scripture in his songwriting, and last month Jim Ellison published a collection of interviews from throughout Dylan’s career, including those conducted by Pete Seeger, Nora Ephron, Susan Edmiston, Studs Terkel, Jon Pareles, Nat Hentoff, Kurt Loder, Steve Allen, Ron Rosenbaum, Bono, Jonathon Cott, Jann Wenner, Robert Shelton, and many others.

In January of ’05, a complete book of Dylan’s lyrics (’62-’02) will give the obsessives and completists more fodder. The times they aren’t a changing much at all: people have been obsessing over Bob Dylan for over 40 years.

'Keats's Odes: A Lover's Discourse' by Anahid Nersessian is a deep and accessible delve into the poetry of one of the great Romantic poets.