No, really, check out what we have for you this time around.

SOAPnet and Blogcritics Get All Sudsy on a Giveaway

You know what I'm not afraid to admit? Honestly, there are a lot of things that I should be afraid (or at the very least embarrassed) to admit, but in specific this time I'm referencing the fact that I used to watch General Hospital.

Man, there was a time in my life (three of my four years in college) that I would sit and watch that show every single day. It always really upset me though that I was going to school in Baltimore and that they were a day behind with the episodes. I felt like if I was taking time of out my busy schedule (organic chemistry) to watch GH, the least WMAR could do was air it on time.

Don't believe me? Maybe I can convince you to check it out. You have absolutely no obligation to do so, but we here at Blogcritics think you might want to check it out. In fact, with SOAPnet's help we're launching a little giveaway to make sure you know all about the new SOAPnet website.

And why are we doing this? Because we want to make sure you know all about the new SOAPnet website. They even have a beautiful logo… 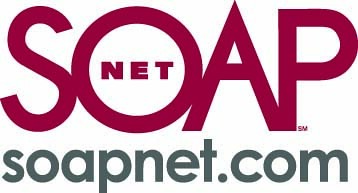 As for the rules? Good question, here they are (well, and there are some on the entry form, too):