That's right, we're launching another In Plain Sight giveaway. That's because we care about you.

Do you know what I love? Hide and seek. I just love it. Was there any game that was more fun as a kid? Okay, there was one — it was called sardines and it was like reverse hide and seek; one person hid and everyone else had to find them. Whoever found the hider had to hide with them, and people ended up packed together like… sardines. See how that works? That's where the game got its name. And boy, is it a swell game.

Now, in sardines, the best place to hide is far away from everyone else, a small, tight space (but nothing that would lock behind you, that's dangerous and a big no-no). Trust me when I tell you this, I was a master at the game. Anyway, small tight space. Something confined and weird. You won't be found, everyone else will get bored, and you'll win. You'll be a hero, it'll be very exciting.

Hey, you know what I just realized? That's kind of like what the witness protection program does for people, they hide them in plain sight. If only there 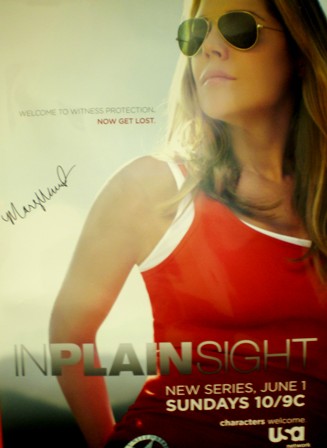 were a television show about that.

Wait a minute. Wait a minute! There is! There is a television show about that and it starts this summer, June 1 at 10pm on USA to be precise. Do you know what it's called (I'll give you a hint, it's not Sardines or Hide and Seek)? Yup, it's In Plain Sight (wow, you're good!). The show stars Mary McCormack as Mary Shannon, and she works for the witness protection program.

Okay, as awesome as that is all by itself, let's put a little cherry on the top, shall we? Let's add just a bit more sweetness to it all. As you may know, Blogcritics already has one giveaway for In Plain Sight running, but you know what that giveaway doesn't include? A poster for the series signed by Mary McCormack herself. I know, hard to believe, but true.

So, here it is, another Blogcritics/In Plain Sight giveaway, and this one is for a signed poster (check out the picture) and, remember, In Plain Sight starts June 1 at 10pm on USA.

As for the rules: