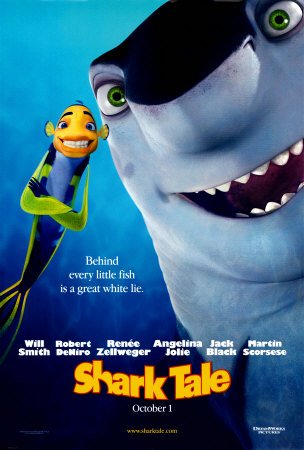 Squeezing in one last session before they left town for (another) extended motor vehicle tour of the Southwest, we dropped the baby off with my parents and took the almost 5 year-old to the Saturday matinee of DreamWorks’ Shark Tale (which broke box office records for an October opening, hooking a cool $49M in North America over hte weekend).

In analyzing the non-greatness of the film, I came to few conclusions. First, the nautical parallel-world theme has been played for all its worth now several times — The Incredible Mr. Limpet, The Little Mermaid, SpongeBob, Finding Nemo notable among them — and while Shark Tale takes it to a new creative level of specificity and visual development (the car wash-whale wash parallel is particularly effective and clever), it feels more like a variation on a theme than a wonderous new world, like in, for example, Monsters, Inc., Toy Story, or Ice Age: a derivation, no matter how exceptionally iterated, is never as satisfying as sui generis.

Secondly, the story — Will Smith, a lovable, fast-talking whale wash laborer who longs to be a “somebody,” sees smitten fellow-employee Zellweger as his “best friend” (a real slap in the gills), stumbles upon a heated “discussion” between brother sharks Black (a sensitive vegetarian in the Reluctant Dragon mode) and Imperioli, “normal” bro ends up accidentally dead, Smith takes credit and becomes renowed “Shark Slayer,” goes Hollywood, alienates Zellweger (“don’t know what you’ve got, ’til it’s gone”), faces crisis, saves the day, recants, recalibrates values — is also a variation on innumerable previous similar tales (“there’s no place like home” among them).

So when you’re milieu and storyline aren’t as fresh as they might be, the result tastes a bit like exquisitely prepared leftovers – we all know fresh fish is best.

Recommended, with noted caveats. The spunky urban soundtrack puts some funk in the trunk and should prove popular in its own right, and this flick, my friends should prove a merchandising bonanza.