Supposed “reformer” Saudi King Abdullah, who ascended to the throne last August, has casually informed Saudi newspapers that they will no longer be running pictures of Saudi babes wearing the alluring traditional Muslim headscarf/bodybag.

Aha, you say, a liberalization move allowing women to be shown with less utterly obscurantist covering? Well, no – women may now not be shown in the papers at all. As recently as May 9, such scandalous eye candy as this was on display. 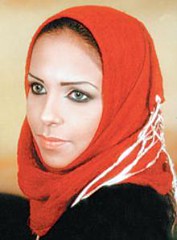 But no more of that nonsense. Are they allowed to show this person? 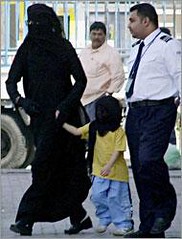 At a policy meeting Monday with editors from the nation’s state-owned or state-“guided” papers (which would be all of them), Kubla Khan, I mean King Abdullah, decreed, “One must think, do they want their daughter, their sister, or their wife to appear in this way. Of course, no one would accept this. The youth are driven by emotion … and sometimes they can be lead astray. So, please, try to cut down on this,” he was quoted in the paper Okaz as saying.

It would appear Saudi Arabia is not to be seen zipping down the hasty road to perditious liberation where women can engage in such madcap activities as driving, voting, or breathing and stuff.

When last we took a look at Saudi popular culture a year ago, Saudi religious scholars were condemning the Lebanese American Idol-type show Star Academy: “Young Arab men and women were put together in an abominable state of mingling of sexes … exposing themselves, singing, dancing and corruption … What happened is considered a crime against Islam and a great offence against the Islamic nation.”

When the show’s Saudi winner triumphantly returned home for an appearance at a Riyadh shopping mall, admirers rushed to shake his hand, and girls even — zounds — kissed him. The Commission for the Promotion of Virtue and Prevention of Vice went bananas and put him on a plane to Jeddah.

“A number of youths and girls crowded round him and deviant behavior occurred. Then the commission removed him from Riyadh on the orders of the governor,” the sheikhs wrote in a huffy statement. “We call on this youth, and all who took part with him … and all who gave media coverage or prizes or votes, we call on all of them to repent before God.”

Things don’t appear to have lightened up a bit in the intervening year.