The worm turns as Craig Schelske accuses country star wife of neglect and having an "intimate relationship" with another man.

Sara Evans Divorce: Husband Counters with Bombshell Accusations of His Own

Thesis, antithesis — will there be a synthesis in the exuberantly salacious Sara Evans divorce tale?

The “thesis” in this little drama is country music Female Vocalist of the Year Sara Evans’ abrupt withdrawal as a contestant from ABC’s Dancing With the Stars in conjunction with incendiary accusations against husband Craig Schelske in a napalm-strength divorce petition.

Evans, 35, filed on October 12, alleging that Schelske, 43, a Republican fundraiser who ran for congress in Oregon’s 5th District in 2002, committed adultery with her personal assistant Alison Clinton, was verbally abusive, drank excessively, watched pornography in the presence of their three young children in their Nashville home, and looted the family “church tithing” bank account of $274,000.

Last Monday, in the first antithesis response to the allegations, Alison Clinton — Evans’ personal assistant, erstwhile nanny to the Schelskes’ children, and “aspiring vocalist” — issued a statement through her attorney denying the charges, saying she “categorically reject[s] the sad, unlawful and despicable attempt by Evans to assign part of the blame for her broken marriage on an alleged affair with Evans’ husband.”

On Wednesday, Clinton took a lie detector test under the auspices of syndicated celebrity gossip show Extra!, administered by “a former FBI agent with a master’s degree in polygraph,” who asked “direct and candid questions about Clinton’s alleged relationship with Craig Schelske.” Thursday, the show announced she had demonstrated “no deception.” 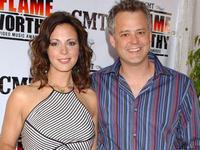 Schelske also denies he has nude photos of himself, or photos of him having sex with other women on any of his computers, and he claims he and Evans were watching pornography TOGETHER when their 7-year-old daughter, whom they believed to be asleep, entered their room unexpectedly. “Husband has never maintained such photographs nor has he ever posed for any photographs of himself taken unclothed except a few taken by wife on their tenth wedding anniversary,” the document states. “Further, Husband denies any sexual photographs of himself with any other women as there are no authentic photographs of husband unclothed with any sexual partner or alone except as taken by Wife or with Wife on the single occasion in which both parties participated.”

Ah hah! He also demands Evans produce said action photos within five days: put up or shut up. “It is impossible that authentic original photographs of such acts as alleged exist. Husband demands that Wife produce the support that would justify such scandalous allegations,” the document sniffs indignantly.

He also denies — while asking for temporary financial support — he is just a slug riding the Evans gravy train. “Husband traveled with Wife on tours and while on the road served in multiple capacities as needed toward her personal and professional needs and as a liaison in her career with others employed by Gingerdog, Inc., the couple’s jointly owned company. Further, the parties agreed that Husband would lead and/or commence other projects in entertainment and other areas.”

Schelske “demands retraction of those allegations, an apology and the further spreading of false information be stopped immediately,” said his attorney, Charlie Gay, Jr. “It is requested that his wife and her attorneys immediately reveal what factual basis they had to make such vicious and untrue allegations. Believing that they had no adequate factual basis for the outrageous claims, he has requested that sanctions be imposed under law and that the allegations be stricken from the record.”

So there you have it: tawdry accusations, more-or-less total denials, and counter-accusations, all awaiting “synthesis.” Will Evans be able to substantiate any of her inflammatory accusations, or will she have to retract them? And what of Schelske’s bombshells?

Will the parties continue to wage this brutal conflict in the media or will they take it private?

Does anyone really give a damn about the kids or are they just pawns? Perhaps it’s time to prove it.