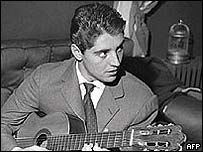 I am trying to understand what this says about me, who has in theory closely followed popular music for 35 years, that I have never even heard of this guy:

Tributes have been coming in for French singer Sacha Distel, who died on Thursday after a long illness at the age of 71.
President Jacques Chirac said “with his melodies full of happiness and optimism, Distel lit up the lives of millions of French people.”

Distel is best known for his version of Raindrops Keep Falling On My Head.

“For him, it was always ‘The Good Life’, the symbol of good humour and charm,” Mr Raffarin said.

The crooner, who had a string of hits in the 1960s and 1970s, started out in music as a professional jazz guitarist at the age of 16.

He died on Thursday in Rayol-Canadel in the region of Var, the AFP news agency reported.

….In France, singer Mireille Mathieu said she was “devastated” by the death of Distel.

“He is the spiritual son of Maurice Chevalier. His songs enchanted us. Listening to his songs made us feel young again.”

She added: “He was an ambassador of charm and French romanticism. We will always remember Mr Scoubidou.”

A spokeswoman for the French Music Bureau in London said he was “an unmissable figure of both jazz and chanson in France”.

She added: “Sacha Distel was a great jazz guitarist and a crooner who worked with Jeanne Moreau, Juliette Greco and Brigitte Bardot.”

Singer Amanda Lear said: “He was one of the few French singers known overseas. Everywhere, he was a star.” [BBC]

He even had his own TV show in the US, where he was also hugely popular.

I guess I’m just an idiot, then.

Distel had a high-profile relationship with Brigitte Bardot, but wed championship skier Francine Breaud in 1963.

Distel will be buried at a private funeral in France in line with his last wishes, his record company said on the singer’s website.

“He had already won several battles with illness but illness won the war,” a statement from Universal Music France said.