At the helm of a once relevant, thought-provoking and edgy magazine is a man who is oblivious to his own uselessness. Jann Wenner — a grasping, preening, simpering, disingenuous aging pseudo-hippy — has clung to his publisher’s post at Rolling Stone as though it were the last life vest on the Titanic.

I have subscribed to Rolling Stone on and off for the last 20 years. I realize of course that the magazine was past its prime even then, but to the young and impressionable, the stories, covers and glossy texture were the fumes that fueled my burning desire to become a journalist; a dream I cleaved to in lieu of any real talent, opportunity, or connection to reality.

Despite RS’s continued slide into obscurity and irrelevance, I have tried to remain loyal with the hope that eventually the magazine would find its voice, direction, passion for journalism. But instead I find silly insipid writing that is childish, biased, and uninsightful. 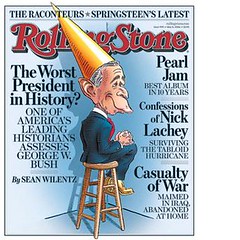 The latest issue, featuring a caricature of our country’s leader wearing a dunce cap on the cover, looking more like a chimp than a world leader, really offends my journalistic sensibilities. Not to put too fine a point on it, but who do they think they are fooling with that kind of cover?

Don’t get me wrong — there are times when I am sure that President Bush is Captain of the Crazy Ship, steering us down the river of doom — but RS’s depiction is beyond the pale, and I didn’t even vote for Bush.

The piece, “The Worst President in History?” by historian Sean Wilentz, is a diatribe on how Bush has mismanaged the presidency, a claim in and of itself I don’t necessarily disagree with; but it tries to disguise itself as an objective analysis of his policies, his leadership, his character, his vision in the context of the greatest and worst presidents of all time.

Wilentz’ central pillar for basing his all-too-obvious feelings is poll results “conducted by those perceived as conservative as well as liberals.” He cautions us that “lopsided decisions of historians should give everyone pause” and that “historians do tend, as a group to be far more liberal than the citizenry as a whole,” but we shouldn’t let that distract us from the overall ineptitude and incompetence of the President.

Truly what bothers me at the core of this piece is the deceptiveness at work, and that’s merely a symptom of the fever-pitched infection of hypocrisy at RS. The collegiate twenty-somethings who read RS are most likely blissfully unaware that the “progressive magazine” they are absorbing, is nothing more that propaganda pamphlet of liberal bias at its most stereotypical – one-sided, cartoonish propaganda in the guise of objective analysis. These are surely not the same people reading the Wall Street Journal or even the New York Times. Their exposure to political analysis is limited to occasional puff pieces sandwiched between pictures of Jessica Alba and the latest rapsheet on Pete Doherty.

A perfect example of fact versus fiction in Wilentz piece is his assertions about the economy. He writes, “Bush crowed in triumph in February 2004, ‘We cut taxes, which basically meant people had more money in their pocket.’ The claim is bogus for the majority of Americans, as are claims that tax cuts have led to impressive new private investment and job growth.”

Interestingly, the New York Times states the economy sets fastest pace since summer of 2003. Of course the economists warn this won’t last, but we’ve heard that before. The economy’s growth is one area that has given pause even to Bush detractors. Despite predications to the contrary, the economy has chugged along at a steady pace regardless of the devastating calamities of 9/11, the Iraq War and Hurricane Katrina. Blogcritics David Nalle provides more comprehensive detail on the economic upswing here.

Again my point of contention isn’t any one misrepresentation of the truth, but more so the extremely biased nature of a piece being paraded around as a well-researched, fact-laden epitome of veracity.

For a “historian,” Wilenz is ignoring one simple fact: all Presidents are criticized harshly in the short-term.

No one will really know how the policies and performance of George W. Bush will be regarded historically for decades or even centuries to come. It is entirely possible that he will be regarded as a genius, a visionary. Or not.

The mainstream media as a whole has done the American psyche a disservice by trying to scare the living shit out of us. And Jann Wenner is the big bully stomping on the obvious bandwagon.

Almost as offensive as the cover story on the president is the “Road Rage” hatchet piece on disgraced and retiring Republican congressman Tom DeLay written by trough-slopping sewer-dweller Matt Taibbi. Of COURSE Tom DeLay is a complete freaking dicknob, but that’s shooting fish in a barrel.

“Delay is a total zero, a loser, 200-odd pounds of the world’s purest pussy repellent… a short guy with a paunch and an asscrack face who spent most of his pre-congressional life cutting rat bait and growing the state of Texas’ silliest set of sideburns. He was ugly outside and in.”

Wow, and people think I am a ruthless bitch.

How does leveling childish insults and sophomoric analogies at a man whose only legacy is being the biggest ballbuster in Washington make me a better informed citizen? It doesn’t. That’s what bloggers are for.

Honestly, I would be the last person to complain about vicious articles attacking political figures, but can we at least spread the love. How come that whackjob from Georgia, Cynthia Mckinney doesn’t get some love? What, aren’t her antics worthy of mocking?

If Jann Wenner and the angry misfits at Rolling Stone really wanted to make an impact and pump the vital blood of truth into the American mind, they would profile the real threats facing us as a global community: dwindling resources, terrorism, viral pandemics and Britney Spears.