Light the fire in the fire place, spread the bear skin rug, Gunther and Pleasureman are coming to town.

In an effort to promote international understanding and co-operation Rhino Records has released the latest disc from Swedish dance-floor sensation Gunther. Pleasureman has been available for download at all the usual digital download providers since October 18th 2005, and is just waiting to introduce you to Gunther’s vision of the new hedonism. 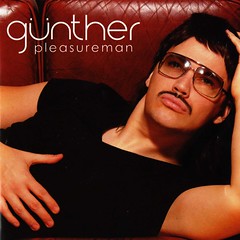 Gunther is on a mission to go out into the world and spread his message of love. With such dance-hall hits as “The Ding Dong Song” already titillating audiences across Europe, he has his sites set on North America as the setting for his next conquests. If that the prospect of his imminent arrival is not enough to stir our puritan blood out of its pre winter doldrums, Pleasureman also includes Gunther’s duet with Samantha Fox, covering her hit “Touch Me”

Other provocative titles that are sure to stimulate include “One Night Stand”, “Wild and Crazy” and “Naughty Boy”. It remains to be seen how well his work communicates to a North American audience the importance of “champagne, glamour, sex, and respect”, the four most important things in Gunther’s life.

For those who can’t get enough of Gunther from his music alone, than a trip to his web site is in order. You can also “Sexualize” your phone with Gunther’s distinctive sound by getting ringtones for “The Ding Dong Song” and “Touch Me” at Rhino’s Ringtone site.

In keeping with the latest technology, iTunes will be offering a video bundle of Pleasureman. This enhanced version will include the video for “The Ding Dong Song” as well as the complete album. Of course Rhino is also offering a Gunther E-Card so you can taste the wares in advance.

The Swedes are famous for their sexual liberation, and what better way to keep the long cold winter nights at bay then with the heat that could be provided from songs by Gunther and his Sunshine Girls. Light the fire in the fire place, spread the bear skin rug, but keep the champagne on ice: Gunther and Pleasureman are coming to town.