...he proves that even though the guitar may not be his to keep, there's no reason for him to be surrendering it any time soon.

There is very little that you can be certain of any more in this world of ours. Increasingly, things have grown more and more complex; nothing is cut and dried and nothing is as simple as we once thought it was. It’s in troubled times like this that a familiar voice is that much more comfortable. 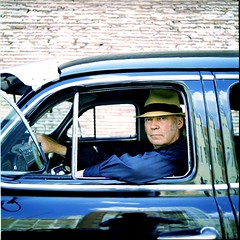 Neil Young may not have the most pleasant voice to come down the pike, but it carries with it a permanence that seems to steady the ever-shifting earth beneath your feet. His newest release, Prairie Wind, is quintessential Neil Young – thoughtful, introspective and replete with the vivid imagery that has made his songs famous.

There has long been something poignant about Mr. Young’s work; perhaps it’s that almost forlorn falsetto that tinges even the most cheerful song with sadness, that speaks directly to the heart of the listener. Even his highly personal songs, and Prairie Wind is his most personal record in ages, capture universal truths that speak to most people.

Trying to remember what my daddy said
Before too much time took his head
He said we’re going back and I’ll show you what I’m talking about
Going back to Cyprus River
Going back to the old farm house.
— Neil Young, “Prairie Wind”, 2005

Even by most people’s standards, Mr. Young has had a rough year. Last June, he had to have emergency surgery to deal with a brain aneurysm, and he had only just recovered from that ordeal when his father died. The last couple of years of his father’s life had not been easy as he had began to suffer from the debilitating effects of Alzheimer’s disease.

Anybody who has had to watch a parent suffer from Alzheimer’s immediately understands the line “Before too much time took his head”. Connections to the past live in memories, and if the memory disappears, what happens to our past? On the song ” Prairie Wind”, and the disc for that matter, Neil Young sees himself becoming the older generation that is the connection to the past.

In the song “No Wonder” he uses the past to warn us about our tenuous future. Comparing people who used to hunt for food with oil exploration destroying caribou habitat, he bemoans how selfish people have gotten in their attitudes towards the world. He warns us that the clock is ticking down if we don’t do something about our behaviour soon.

One of my favourite tracks on the disc so far is “This Old Guitar”. I admit that I have a soft spot for anything Emmylou Harris sings harmonies on, but even without that added bonus, I’d like it for the message it carries. It starts with that oh-so-familiar Neil Young acoustic chord progression that half the world can identify, which leads into the theme of the song perfectly.

This is a song about knowing who you are, and where you fit into the world. Neil Young has been a highly successful singer and songwriter, but he knows he wasn’t the first, and he won’t be the last. He has the perspective to realize that it’s not him that’s important, but the music. I doubt it means he is ready to quit; it’s more about being able to see the past and the future simultaneously and appreciating the present.

Neil Young has travelled all over the map musically; from Transformer where he experimented with technology, to grunge rock, to country folk and even a fifties style rockabilly album. Pinning him down musically is a disservice to the man.

If someone were to mention the name Neil Young to me casually in conversation, I would get a certain “sound” in my head. This album is that sound to me. The best way to describe it would be to call it a Neil Young album. Maybe not as hard edged as some of his earlier work, but the toughness is still there in his voice and the challenges he issues with his songs.

Neil Young is a realist. Unlike some of his contemporaries who deny the reality of their aging, he accepts it, but does not surrender to it. On Prairie Wind he proves that even though the guitar may not be his to keep, there’s no reason for him to be surrendering it any time soon.

If you want to give the album a listen before stepping out to buy it, the people over at Reprise records have given you plenty of opportunities to check out stuff online. The links below will take you to a variety of video and audio streams for your listening and viewing pleasure. Enjoy.