Arlo Guthrie works to ensure the connection between people and their music remains unbroken.

Twenty-five years ago, on a summer’s day in Toronto, I went down to the waterfront at around noon to stake out at a seat for a concert that wouldn’t begin until eight o’clock that evening. The old Ontario Place Forum’s seating was almost full, only the final rows of seats were still available, and people were already beginning to claim patches of lawn to lay blankets on.

When eight o’clock finally came round the band came out onto stage followed by two men. One older slender man followed by a guy with a mass of really curly hair. Pete Seeger and Arlo Guthrie were doing one of their of periodic concert tours; two generations of music experience that probably represented a century’s worth of music . 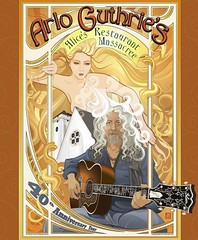 For two and half hours they sang songs, together, and solo, that represented a history of the American Folk song. Songs from the Spanish Civil War, from the early days of the fight to organize unions, from the depression, all the way up to songs that had just been written. The music they played that afternoon is probably the closest thing we in North America have to an oral history.

Arlo Guthrie’s two disc Live In Sydney continues that tradition. Twenty-five years latter and the roles have changed. Arlo now represents the voice that reaches back into the past, connecting and reminding us of things that are still important, while the future is represented in the form of his son, Abe Guthrie, playing keyboards and providing background vocals for his dad.

Anyone who is familiar with Arlo Guthrie will know he’s as much a story teller as singer; the first song that he received recognition for, “Alice’s Restaurant Massacree parts one and two”, was a recounting of the events leading up to his arrest for littering one thanksgiving, and his visit to the draft board. One of the great joys of any Arlo concert, whether live or on disc, are the stories he tells in between songs.

Whether introducing a song, talking about the world, or sharing memories of people he’s known and places he’s been, his wry humour and self deprecating attitude create an atmosphere so relaxed you can almost forget your in a concert hall. His stories serve to bridge the gap between performer and audience, allowing those listening to feel as much a part of what’s happening as the people on stage.

“Some people think a folksinger is someone who just sings their own songs. That’s a shame. It’s like being of the tradition, rather than in it. I’ve taught myself to make any song I like, my own.” Arlo Guthrie

The songs on this release range from Arlo’s own originals, including earlier pieces like “Chilling of the Evening”, and brand new ones like the bittersweet “My Old Friend”; songs from his father’s generation by Cisco Huston, Woody Guthrie and others; and a couple of songs from some contemporaries of Arlo’s, Kris Kristofferson, Bob Dylan, and Steve Goodman.

Being Arlo , he also has a story to go with almost every song. It could be a brief intro with a memory of how he first heard it, like Steve Goodman buying him a beer so he’d listen to “City of New Orleans”. Or how events reminded him of a song he used to play: walking down the street and in a store window seeing a poster of himself and Janis Joplin and remembering it being taken the time he played her a song he’d just been taught, “Me and Bobby McGee”.

Then of course there are the songs that are stories and the songs with a story. In the former category falls the infamous tale of driving his motorcycle and having his “E” string break (written out in full for what must be the first time in the booklet accompanying the two cd set.) Of course how could an Arlo album recorded the year before the 40th anniversary of his most famous song, “Alice’s Restaurant” be complete without a story about the song?

“Remembering Alice” is about the time he didn’t one time on stage. About ten minutes into the song he recounts going completely blank, and trying to stall. Two of his children were on stage with him that night, and he asked each them for help, but neither knew the lyrics. In a joke after the show he says to them, “I know my daddy’s songs”.

The upshot was that his daughter took it upon herself to learn it:

“I said, “My God, I’m free” The never-ending half hour Groundhog Day movie of my life had been passed to the next generation. And I thought, “My goodness that poor kid”…Any way when she comes to Australia, just ask her. I’m sure she’ll be happy to do it for you” Arlo Guthrie, Live In Sydney

Of all the songs that were written by Arlo’s father Woody “This Land is Your Land” is probably the most famous. I remember once seeing Arlo being interviewed about his dad on a P.B.S. special and he was talking about being in school as a kid and being the only one in class to not know the lyrics. It could be why on this album he tells of how it was the only one of his Dad’s songs that Woody actually taught him.

He tells of how in the early seventies his mother had been part of a cultural exchange to China. She had been a dancer with the Martha Graham company, and she was taken out to the middle of China and a group of school children came out and sang “This Land is Your Land” Now she was all excited about that, but he made some smart assed comment about “Why would they be singing about California to the New York island?” “She just looked at me with one of those Mom kind of looks and said “Oh Arlo” and walked away”

So what was the point in the story? Well the point was to show that the song wasn’t about geography but about those things that are important to a lot of us: Liberty, freedom and justice. That’s the thing about Arlo and his stories, some of them may be nonsense (The intro for “Coming Into Los Angeles” for example) but he uses them to make us think about songs that we might take for granted. In his gentle way he reminds us of the important things in life that we might have forgotten.

Arlo laughs a lot, usually at his own expense, and that laughter is infectious. His concerts have the feel of a get together out at the family homestead where the family is sitting around trading stories about the places they’ve been and the people they’ve known. His voice may strain to reach high notes, it always has, but he always strikes that perfect note of connection with is audience.

Live In Sydney captures all that is wonderful about an Arlo Guthrie concert. His warm laid-back style, his humour, his stories, and most of all his love for what he does. Arlo’s is currently on a tour that will take him across North America, check the schedule for a stop near you.

You might notice a two-week period in December that lists a bunch of concert dates as To Be Announced. It’s during that time he and a group of friends will be taking the famed “City Of New Orleans” train for one last ride from Chicago to New Orleans in an attempt to raise money to re equip all the bars and night clubs in New Orleans with sound and lighting equipment, so that the music that shaped American pop culture won’t stop being played.

One way or another Arlo Guthrie works to ensure the connection between people and their music remains unbroken. He is a real “folk” musician.