Psych, Monk, and a Giveaway

Happy days are here again! Come this Friday (July 18), Monk and Psych will be back on! That's right, Monk and Psych are coming back. I'm excited. I'm very excited. The two shows are funny, they're insightful, they're humorous, they have good mysteries, and many humorous quips. Did I tell you yet that I find them funny? Plus, they're going to be back on the air this Friday. Good times… the good times are starting up again this Friday! Or, as the phrasing from the PR folks goes…

I don't know if you're aware of this, but Hector Elizondo is going to be on Monk as the new therapist, and Cybill Shepherd is going to be on Pysch as Shawn's mom. Those are two pretty good names to be adding to cast lists. While I'm excited about those names, I'm more excited that the shows are coming back in general. 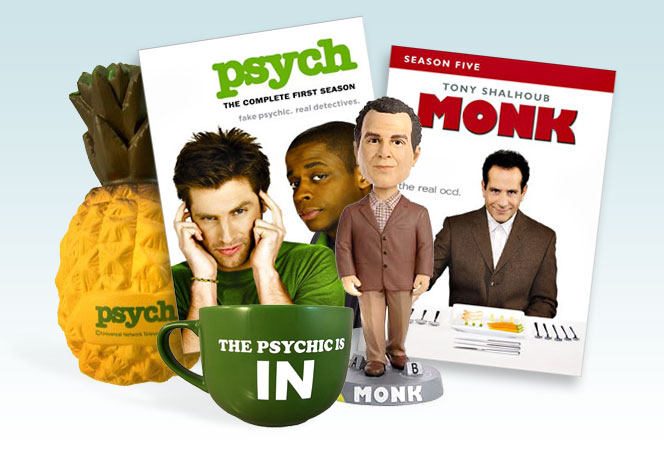 In fact, I'm so excited that I can hardly contain myself and I need to share my happiness. I have to share my happiness, it's just who I am. So, here it is, we have two (2), count'em, one… two Psych & Monk Friday Night Prize Packs to giveaway. Each prize pack, get this, contains: Psych – Season One on DVD, Monk – Season Five on DVD, a Psych pineapple stress toy, Psych coffee mug, and Monk bobblehead. Pretty much all the stuff you see in the picture to the right.

Now that I've shared my happiness with you, if you win, I hope you'll share your happiness with me. I hope that after you get sent all the goodies you'll turn right around and send me the Psych coffee mug. I can't tell you how badly I want one of those things.

Anyways, here are the rules: