Three Olives Vodka has released three new flavors, and I'm here to drink them for you.

Last time I stepped out of my usual areas of expertise and reviewed a drink, it was a tequila. I informed you at that time that scotch was my drink of choice, but that I had been sent the tequila in question to review and was more than happy to pass along my thoughts. Well, it's happened again, but not with tequila — this time, I was sent three bottles of vodka (perhaps my discussion of James Bond in the tequila piece hit a nerve).

Now, I'll tell you right off, the Triple Shot Espresso is utterly fantastic. It's a dark, rich color, and terribly drinkable both by itself and put into the most delicious mudslide you could ever imagine. Some may say it's overkill to put triple shot espresso vodka into a drink that already contains Kahlua coffee liqueur. They're wrong. It's delicious. One could drink a pitcher full of those and, while there would be regrets in the morning, it would be a truly swell night.

Three Olives Triple Shot Espresso has a definite coffee flavor to it, without ever being overpowering. It seems slightly more viscous than a normal vodka (perhaps that is an illusion due to its dark, rich color). Drunk as a shot, it goes down very easily and very smoothly. There is no hint of burn and one drink can quickly lead to another.

One of the recipes recommended with the Root Beer vodka is a "British Car Bomb," which contains a shot and a half pint of ale. It's a good way to go. I don't particularly approve of having a drink entitled a "car bomb," but Three Olives didn't come up with that, so I can't really blame them.

The last of the varieties, the Tomato, is the least enjoyable of the three. This is perhaps the case because it is far less tomato flavored than Bloody Mary flavored. It is spicy and strong and has a different oomph to it; it's a clear Bloody Mary in a shot glass. It's not something I recommend doing straight up, it's a definite mixer alcohol. Frankly, I think that it would work quite well in a Bloody Mary. 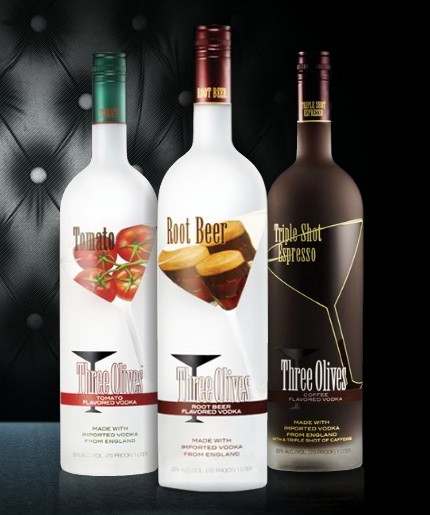 As for James Bond, and whether he would drink any of these… I think the odds are definitely against it. One of the recipes that came with the vodka was for a "Bloody Martini," but that doesn't feel like 007's style. Yes, he mixes blood and alcohol, but not in the same glass. But, as much as I love him, his not drinking it is no reason for you not to go out and buy some, particularly the Triple Shot Espresso. I can't say enough about its goodness.

The infusion of cherry makes for excellent mixed drinks.