The Pope met today with ambassadors to the Vatican from 21 predominantly Islamic countries at his residence near Rome in an attempt to assuage lingering anger over remarks he made in a speech earlier this month.

At today's gathering, the pontiff beat quite diplomatically around the bush of contention, expressing "total and profound respect" for Islamic believers, but he did not directly apologize for his earlier statements, nor did he retract them.

In fact, he seemed to back off a bit from apologetic statements he made last week about the flap. 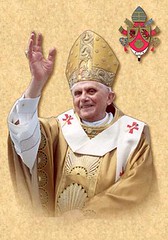 The reality is this: the Pope's comments against Islamic violence generated more Islamic violence, including the killing of an Italian nun in Somalia, attacks on Christian churches in Palestinian territories, and angry demonstrations across the lands of Islam, leaving the proof of the matter rather starkly in the pudding.

It is this unavoidable gorilla in the mosque that lends some integrity to Pope Benedict XVI's unmistakable refusal to retract the comments made in the September 12 speech on faith and reason at the University of Regensburg.

In that speech he quoted a 14th-Century Byzantine emperor, Manuel II Paleologos, saying, "'Show me just what Muhammad brought that was new, and there you will find things only evil and inhuman, such as his command to spread by the sword the faith he preached.'"

The Pope then explained, "The emperor, after having expressed himself so forcefully, goes on to explain in detail the reasons why spreading the faith through violence is something unreasonable. Violence is incompatible with the nature of God and the nature of the soul. 'God,' he says, 'is not pleased by blood – and not acting reasonably is contrary to God's nature. Faith is born of the soul, not the body. Whoever would lead someone to faith needs the ability to speak well and to reason properly, without violence and threats.'"

Last week, the Pope claimed he had been misunderstood, that his quotation had been taken out of context, that his real intention had been to "explain that religion and violence do not go together, but religion and reason do," and that the words of Manuel II Paleologos did not reflect his personal opinion – at least the part about Islam being only "evil and inhuman," one would imagine.

He also said, "I am deeply sorry for the reactions in some countries to a few passages of my address at the University of Regensburg, which were considered offensive to the sensibility of Muslims." But, he never apologized for the remarks themselves, nor did he do so when he met with the envoys today.

Last week he concluded, "I hope this serves to appease hearts and to clarify the true meaning of my address, which in its totality was and is an invitation to frank and sincere dialogue, with mutual respect."

A wish to "appease hearts" and an invitation to continued dialogue is not the same thing as "I'm okay, you're okay." Benedict still clearly believes he has some bones to pick with Islam.

Today, his words of respect were borrowed from the Second Vatican Council of 1965, "'The Church looks upon Muslims with respect. They worship the one God living and subsistent, merciful and almighty, Creator of heaven and earth, who has spoken to humanity and to whose decrees, even the hidden ones, they seek to submit themselves whole-heartedly, just as Abraham, to whom the Islamic faith readily relates itself, submitted to God.'"

Using interesting words, Benedict then said he placed himself "firmly within this perspective," and to prove this he quoted himself from yet another speech. "'Inter-religious and inter-cultural dialogue between Christians and Muslims cannot be reduced to an optional extra. It is, in fact, a vital necessity, on which in large measure our future depends.'"

Note the psychological distance all this quoting — even quoting himself! — creates, somewhat like a judge citing precedent: i.e., "I don't disagree with this enough to strike it down."

Then he got to the meat of his position. "I sincerely pray that the relations of trust which have developed between Christians and Muslims over several years, will not only continue, but will develop further in a spirit of sincere and respectful dialogue, based on ever more authentic reciprocal knowledge which, with joy, recognizes the religious values that we have in common and, with loyalty, respects the differences," he said.

"Faithful to the teachings of their own religious traditions, Christians and Muslims must learn to work together, as indeed they already do in many common undertakings, in order to guard against all forms of intolerance and to oppose all manifestations of violence," the Pope continued.

"As Pope John Paul II said in his memorable speech to young people at Casablanca in Morocco, 'Respect and dialogue require reciprocity in all spheres, especially in that which concerns basic freedoms, more particularly religious freedom. They favor peace and agreement between peoples.'"

In other words, and I paraphrase freely, "You are going to have to learn to put up with criticism – get over yourselves. Violence in the name of religion is wrong, always. You must clarify the meaning of 'jihad.' Many Islamic clerics preach death and violence against non-believers and apostates in the name of jihad. This must end. Next, if you want religious freedom where we are in political control, you must do the same for us where you are in control – like, say, Iran, Saudi Arabia, Sudan, Pakistan, Afghanistan, etc."

I wonder if it's coincidence that the U.S. State Department annual report on religious freedom throughout the world mentioning these countries by name as egregious offenders was released ten days ago.

Reaction to today's speech was mixed. Iraqi ambassador Albert Yelda told the BBC, "I think it is time to put what happened behind us and build bridges among all the civilizations," he said. But after the pontiff's brief speech to the gathered envoys hammered home the need for "dialogue," there was no, um, dialogue.

Indonesian ambassador Bambang Prayitno said, "We had hoped that there would have been a dialogue, but that was not the case. In general, we were actually a bit surprised that the meeting was a short one and just like that."

You shouldn't have been surprised.